Arguing about Empire: Imperial Rhetoric in Britain and France, 1882-1956 (Paperback) 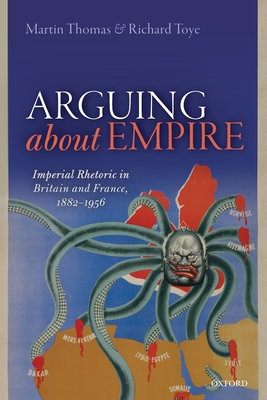 Arguing about Empire: Imperial Rhetoric in Britain and France, 1882-1956 (Paperback)


Not On Our Shelves—Ships in 1-5 Days
Arguing about Empire analyses the most divisive arguments about empire between Europe's two leading colonial powers from the age of high imperialism to the post-war era of decolonization. Focusing on the domestic contexts underlying imperial rhetoric, Arguing about Empire adopts a case-study approach, treating key imperial debates as historical episodes to be investigated in depth. The episodes in question have been selected both for their chronological range, their variety, and, above all, their vitriol. Some were straightforward disputes; others involved cooperation in tense circumstances. These include the Tunisian and Egyptian crises of 1881-2, which saw France and Britain establish new North African protectorates, ostensibly in co-operation, but actually in competition; the Fashoda Crisis of 1898, when Britain and France came to the brink of war in the aftermath of the British re-conquest of Sudan; the Moroccan crises of 1905 and 1911, early tests of the Entente Cordiale,
when Britain lent support to France in the face of German threats; the 1922 Chanak crisis, when that imperial Entente broke down in the face of a threatened attack on Franco-British forces by Kemalist Turkey; World War Two, which can be seen in part as an undeclared colonial war between the former allies, complicated by the division of the French Empire between De Gaulle's Free French forces and those who remained loyal to the Vichy Regime; and finally the 1956 Suez intervention, when, far from defusing another imperial crisis, Britain colluded with France and Israel to invade Egypt - the culmination of the imperial interference that began some eighty years earlier.
Martin Thomas, Professor of Imperial History, University of Exeter, Richard Toye, Professor of Modern History, University of Exeter Martin Thomas is Professor of Imperial History and Director of the Centre for the Study of War, State, and Society at the University of Exeter. He has written widely on the history of European decolonization and French international politics. His most recent books are Violence and Colonial Order (2012) and Fight or Flight: Britain, France, and their Roads from Empire (2014). Richard Toye is Professor of Modern History at the University of Exeter, and has been described by the New York Times as 'one of Britain's smartest young historians'. He is a specialist in the history of rhetoric and is the author of numerous articles and several books, including Rhetoric: A Very Short Introduction (2013) and The Roar of the Lion: The Untold Story of Churchill's World War II Speeches (2013).