Quantum Reality: The Quest for the Real Meaning of Quantum Mechanics - A Game of Theories (Hardcover) 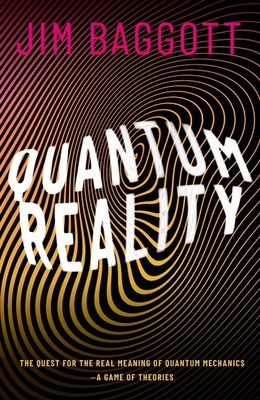 Quantum Reality: The Quest for the Real Meaning of Quantum Mechanics - A Game of Theories (Hardcover)


Not On Our Shelves—Ships in 1-5 Days
Quantum mechanics is an extraordinarily successful scientific theory. It is also completely mad. Although the theory quite obviously works, it leaves us chasing ghosts and phantoms; particles that are waves and waves that are particles; cats that are at once both alive and dead; and lots of
seemingly spooky goings-on. But if we're prepared to be a little more specific about what we mean when we talk about 'reality' and a little more circumspect in the way we think a scientific theory might represent such a reality, then all the mystery goes away. This shows that the choice we face is
actually a philosophical one. Here, Jim Baggott provides a quick but comprehensive introduction to quantum mechanics for the general reader, and explains what makes this theory so very different from the rest. He also explores the processes involved in developing scientific theories and explains how these lead to different
philosophical positions, essential if we are to understand the nature of the great debate between Niels Bohr and Albert Einstein. Moving forwards, Baggott then provides a comprehensive guide to attempts to determine what the theory actually means, from the Copenhagen interpretation to many worlds
and the multiverse. Richard Feynman once declared that 'nobody understands quantum mechanics'. This book will tell you why.

Jim Baggott is an award-winning science writer. He trained as a scientist at the University of Oxford before embarking on post-doctoral research studies at Oxford and at Stanford University in California. Following a tenured lectureship at the University of Reading, he worked for Shell InternationalPetroleum for 11 years before leaving to establish his own business consultancy and training practice. Jim's many books include Quantum Space (OUP, 2018), Mass (OUP, 2017), for which he won the 2020 Premio Cosmos prize, Origins (OUP, 2015), Higgs (OUP, 2012), The Quantum Story (OUP, 2011), and ABeginner's Guide to Reality (Penguin, 2005).