The Error of Truth: How History and Mathematics Came Together to Form Our Character and Shape Our Worldview (Hardcover) 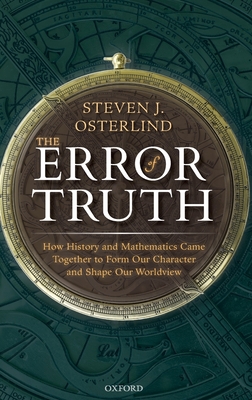 The Error of Truth: How History and Mathematics Came Together to Form Our Character and Shape Our Worldview (Hardcover)


Not On Our Shelves—Ships in 1-5 Days
Quantitative thinking is our inclination to view natural and everyday phenomena through a lens of measurable events, with forecasts, odds, predictions, and likelihood playing a dominant part. The Error of Truth recounts the astonishing and unexpected tale of how quantitative thinking came to be, and its rise to primacy in the nineteenth and early twentieth centuries. Additionally, it considers how seeing the world through a quantitative lens has shaped our perception of the world we live in, and explores the lives of the individuals behind its early establishment. This worldview was unlike anything humankind had before, and it came about because of a momentous human achievement: we had learned how to measure uncertainty. Probability as a science was conceptualised. As a result of probability theory, we now had correlations, reliable predictions, regressions, the bellshaped curve for studying social phenomena, and the psychometrics of educational testing. Significantly, these developments happened during a relatively short period in world history-- roughly, the 130-year period from 1790 to 1920, from about the close of the Napoleonic era, through the Enlightenment and the Industrial Revolutions, to the end of World War I. At which time, transportation had advanced rapidly, due to the invention of the steam engine, and literacy rates had increased exponentially. This brief period in time was ready for fresh intellectual activity, and it gave a kind of impetus for the probability inventions. Quantification is now everywhere in our daily lives, such as in the ubiquitous microchip in smartphones, cars, and appliances; in the Bayesian logic of artificial intelligence, as well as applications in business, engineering, medicine, economics, and elsewhere. Probability is the foundation of quantitative thinking. The Error of Truth tells its story-- when, why, and how it happened.

Steven Osterlind, Emeritus Professor, University of Missouri Professor Steven J. Osterlind is Emeritus Professor (Measurement & Statistics), University of Missouri where he served for 32 years as a distinguished professor and dean. His research interests include statistical modeling with general linear model, hierarchical linear modeling, multilevel modeling; maximum likelihood, Bayesian estimation. He has over 200 academic publications to his name, including five books.