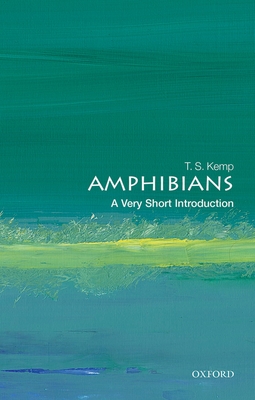 
On Our Shelves Now at:
Very Short Introductions: Brilliant, Sharp, Inspiring From frogs, toads, newts, and salamanders, to the lesser-known caecilians, there are over 8,000 species of amphibians alive today. Characterised by their moist, naked skin and the tadpole phase of their lives, they are uniquely adapted to occupy the interphase habitat between freshwater and land. This Very Short Introduction explores amphibians' evolution, adaptations, and biology, from the first emergence of tetrapods onto land 370 million years ago, to how their permeable skin enables them to thrive in their habitat today. T. S. Kemp describes how different amphibians go about their lives, looking in particular at their complex courtship behaviour and their extraordinary means of providing care for their eggs and larvae. Finally, he considers amphibians' relationship to humans, and the ways in which they have been exploited as food, folk medicine, and pets, as well as used in many areas of scientific research. Today amphibians face a serious threat, with almost half of species judged to be at risk of extinction. As the causes include habitat destruction, pollution, and disease, mostly resulting from human activity, T. S. Kemp shows that the conservation of amphibians is very much in our hands. ABOUT THE SERIES: The Very Short Introductions series from Oxford University Press contains hundreds of titles in almost every subject area. These pocket-sized books are the perfect way to get ahead in a new subject quickly. Our expert authors combine facts, analysis, perspective, new ideas, and enthusiasm to make interesting and challenging topics highly readable.

T. S. Kemp, Emeritus Fellow, St John's College, University of Oxford T. S. Kemp was appointed Tutor in Zoology at St John's College, Oxford in 1975, where he conducted undergraduate teaching courses on vertebrate evolution and biology, and on palaeobiology. He was also Senior Dean for several years before his retirement in 2009, when he was elected Emeritus Research Fellow, and appointed Honorary Research Associate of the Oxford University Museum of Natural History. T. S. Kemp's published titles include, among others, Reptiles: A Very Short Introduction (OUP, 2019), Mammals: A Very Short Introduction (OUP 2017), and The Origins and Evolution of Mammals (OUP, 2005). His research and field collecting have taken him on expeditions to Zambia, South Africa, Australia, and India, and since 2013, he and his wife have travelled extensively in southern Africa, observing and photographing wildlife.