Standards for the Management of Open Fractures (Paperback) 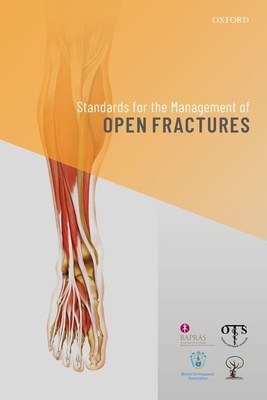 Standards for the Management of Open Fractures (Paperback)


Not On Our Shelves—Ships in 1-5 Days
Simon Eccles, Consultant Plastic Surgeon, Chelsea and Westminster Hospital NHS Foundation Trust, London, UK, Bob Handley, Consultant for Trauma and Orthopaedic Surgery, John Radcliffe Hospital, Oxford University Hospitals NHS Foundation Trust, Oxford, UK, Umraz Khan, Consultant Plastic Surgeon, Orthoplastic Surgery, North Bristol NHS Trust, Bristol, UK, Iain McFadyen, Consultant Orthpaedic Trauma Surgeon, Orthopaedic Department, Royal Stoke University Hospital, Stoke-on-Trent, UK, Jagdeep Nanchahal, Professor of Hand, Plastic & Reconstructive Surgery, Oxford University Hospitals, Oxford, UK, Selvadurai Nayagam, Consultant Orthopaedic Surgeon, Royal Liverpool Children's Hospital and Royal Liverpool and Broadgreen University Hospital, Liverpool, UK Simon Eccles is a Craniofacial surgeon at Chelsea and Westminster Hospital. He is the Secretary of BAPRAS and a coeditor of this important interspecialty book. He has previously been a consultant in plastic surgery at Charing Cross Hospital, where he worked with a number of the authors involved in this book. As head of professional standards at BAPRAS he is committed to providing a framework for interspecialty working and improving standards of care forpatients. Mr Bob Handley is a Consultant for Trauma and Orthopaedic surgery at the John Radcliffe Hospital. He is an Honorary Senior Lecturer in Trauma and Orthopaedics at the University of Oxford. He was co-chair of the NICE guideline development group for both complex and non-complex fractures, and a memberof the group that developed the NICE Hip Fracture guideline. He is a past president of the Orthopaedic Trauma Society and AOUK. He is a current member of the British Orthopaedic Association Council and their Trauma Group. Mr Khan runs a world leading, high volume orthoplastic service at a major trauma centre in Bristol both for adults and children. Mr Khan has promoted the concepts of Orthoplastic surgery in the UK and abroad. He co-authored the predecessor to this book published in 2009. Mr Khan continues to publishclinically relevant papers, which are well known and oft quoted. Mr Khan is the editor of the lower limb section of the Oxford Textbook of Plastic Surgery. Mr Khan has on invitation lectured around the world on the subject of lower limb trauma with the motivation of improving outcomes. Mr Khan isEditor-in-Chief for the International Journal of Orthoplastic Surgery. Mr Khan was the only plastic surgeon in the Clinical Reference Group at the DoH for specialist surgery specifically on open fracture management. Mr McFadyen is an experienced trauma and limb reconstruction surgeon specialising in complex limb injuries and the complications of fractures. He was a clinical lead at national and regional levels in helping establish Major Trauma Networks in England. Together with Mr Bob Handley, Mr McFadyenco-chaired the NICE guideline development group for complex and non-complex fracture guidelines and was a member of the project executive for the suite of NICE trauma guidelines. Mr McFadyen is Chair of Education for the orthopaedic trauma organisation AO UK and Ireland, and is an internationalleader in developing trauma instructional courses across the globe. Professor Nanchahal led the development of the orthoplastic service together with Michael Pearse at the Charing Cross Hospital, now Imperial College Healthcare Trust, in London in 1996. He was lead author on the previous edition of this 'Standards' book published in 2009. A firm believer inevidence-based medicine, he was the only plastic surgery member of the NICE Guidance Development Groups on Complex and Non-Complex fractures and remains an active member of the Expert panel of the NICE Centre for Guidelines. Mr Nayagam is a clinical leader in limb reconstruction surgery and a strong proponent of collaborative multidisciplinary work in trauma and limb reconstruction. He was a major contributor to the previous edition of this book in 2009 and part of the NICE Guideline Development Group on ComplexFractures. He was a past President of the British Limb Reconstruction Society. He has authored several textbooks on Orthopaedics and teaches nationally and internationally on limb reconstruction.