Communities Under Fire: Urban Life at the Western Front, 1914-1918 (Hardcover) 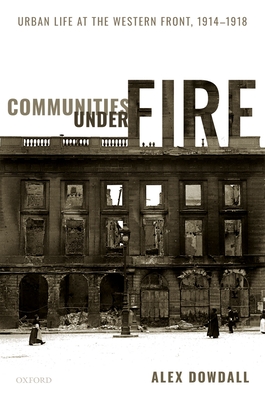 Communities Under Fire: Urban Life at the Western Front, 1914-1918 (Hardcover)


Not On Our Shelves—Ships in 1-5 Days
Between 1914 and 1918, the Western Front passed through some of Europe's most populated and industrialised regions. Large towns including Nancy, Reims, Arras, and Lens lay at the heart of the battlefield. Their civilian inhabitants endured artillery bombardment, military occupation, and material hardship. Many fled for the safety of the French interior, but others lived under fire for much of the war, ensuring the Western Front remained a joint civil-military space. Communities under Fire explores the wartime experiences of civilians on both sides of the Western Front, and uncovers how urban communities responded to the dramatic impact of industrialized war. It discusses how war shaped civilians' personal and collective identities, and explores how the experiences of military violence, occupation, and forced displacement structured the attitudes of civilians at the front towards the rest of the nation. Drawing on a vast array of archival sources, letters, diaries, and newspapers in English, French, and German, it reveals the history of the Western Front from the perspective of its civilian inhabitants. From Leningrad to Warsaw, Hamburg, and, more recently, Sarajevo and Donetsk, urban violence has remained a feature of warfare in Europe, turning cities into battlefields. On each occasion, civilian populations were at the heart of military operations, and forced to adapt to life in a warzone. This was also the case between 1914 and 1918, despite the myth that the First World War was predominantly a soldiers' war. The civilian inhabitants of the Western Front were among the first to suffer the full impact of modern, industrialized war in an urban setting. Communities under Fire explains the multiple ways by which these urban residents responded to, were changed by, succumbed to, or survived the enormous pressures of life in a warzone.