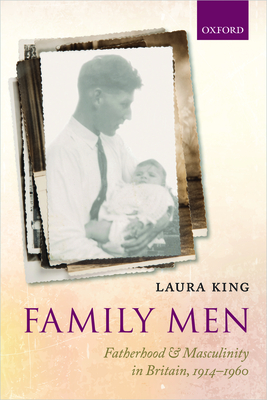 
Not On Our Shelves—Ships in 1-5 Days
Fathers are often neglected in histories of family life in Britain. Family Men provides the first academic study of fathers and families in the period from the First World War to the end of the 1950s. It takes a thematic approach, examining different aspects of fatherhood, from the duties it encompassed to the ways in which it related to men's identities. The historical approach is socio-cultural: each chapter examines a wide range of historical source materials in order to analyse both cultural representations of fatherhood and related social norms, as well as exploring the practices and experiences of individuals and families. It uncovers the debates surrounding parenting and family life and tells the stories of men and their children. While many historians have examined men's relationship to the home and family in histories of gender, family life, domestic spaces, and class cultures more generally, few have specifically examined fathers as crucial family members, as historical actors, and as emotional individuals. The history of fatherhood is extremely significant to contemporary debate: assumptions about fatherhood in the past are constantly used to support arguments about the state of fatherhood today and the need for change or otherwise in the future. Laura King charts men's changing experiences of fatherhood, suggesting that although the roles and responsibilities fulfilled by men did not shift rapidly, their relationships, position in the family, and identities underwent significant change between the start of the First World War and the 1960s.

Laura King, Research Fellow, University of Leeds Laura King is a Research Fellow within the School of History at the University of Leeds. Having completed a PhD at the University of Sheffield in 2011, she then moved to the Centre for the History of Medicine, University of Warwick, before commencing her fellowship at Leeds in 2012. As well as researching the history of fatherhood in twentieth-century Britain, Laura has developed a number of public engagement initiatives around fatherhood, and her current role involves supporting researchers at Leeds to ensure their research has significance outside academia. You can follow her on Twitter @DrLauraKing.