The Arts of Disruption: Allegory and Piers Plowman (Hardcover) 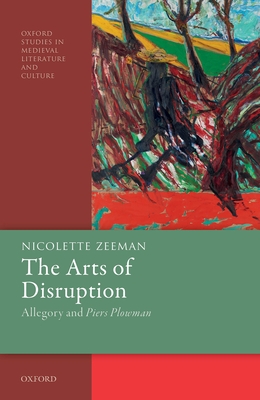 The Arts of Disruption: Allegory and Piers Plowman (Hardcover)


Not On Our Shelves—Ships in 1-5 Days
The monograph series Oxford Studies in Medieval Literature and Culture showcases the plurilingual and multicultural quality of medieval literature and actively seeks to promote research that not only focuses on the array of subjects medievalists now pursue - in literature, theology, and philosophy, in social, political, jurisprudential, and intellectual history, the history of art, and the history of science - but also that combines these subjects productively. It offers innovative studies on topics that may include, but are not limited to, manuscript and book history; languages and literatures of the global Middle Ages; race and the post-colonial; the digital humanities, media and performance; music; medicine; the history of affect and the emotions; the literature and practices of devotion; the theory and history of gender and sexuality, ecocriticism and the environment; theories of aesthetics; medievalism. The Arts of Disruption: Allegory and Piers Plowman offers a series of new readings of the allegorical poem Piers Plowman: but it is also a book about allegory. It argues not just that there are distinctively disruptive 'arts' that occur in allegory, but that allegory, because it is interested in the difficulty of making meaning, is itself a disruptive art. The book approaches this topic via the study of five medieval allegorical narrative structures that exploit diegetic conflict and disruption. Although very different, they all bring together contrasting descriptions of spiritual process, in order to develop new understanding and excite moral or devotional change. These five structures are: the paradiastolic 'hypocritical figure' (such as vices masked by being made to look like 'adjacent' virtues), personification debate, violent language and gestures of apophasis, narratives of bodily decline, and grail romance. Each appears in a range of texts, which the book explores, along with
other connected materials in medieval rhetoric, logic, grammar, spiritual thought, ethics, medicine, and romance iconography. These allegorical narrative structures appear radically transformed in Piers Plowman, where the poem makes further meaning out of the friction between them. Much of the allegorical work of the poem occurs at the points of their intersection, and within the conceptual gaps that open up between them. Ranging across a wide variety of medieval allegorical texts, the book shows from many perspectives allegory's juxtaposition of the heterogeneous and its questioning of supposed continuities.

Nicolette Zeeman, Professor of Medieval and Renaissance English, University of Cambridge Nicolette Zeeman is Professor of Medieval and Renaissance English at King's College and in the Faculty of English, University of Cambridge. Author of Piers Plowman and the Medieval Discourse of Desire (2006), she co-edited with Jean Michel Massing and contributed to King's College Chapel 1515-2015: Art, Music and Religion in Cambridge (2014), and, with Dallas Denery II and Kantik Ghosh, Uncertain Knowledge: Scepticism, Relativism, and Doubt in the Middle Ages (2014). She is interested in and has also published on Chaucer, medieval literary theory, song, scepticism, mythography, and the chivalric 'idol'. She is working on personification, the Gawain Poet, and developing a project on the theory of the idol in later medieval culture.