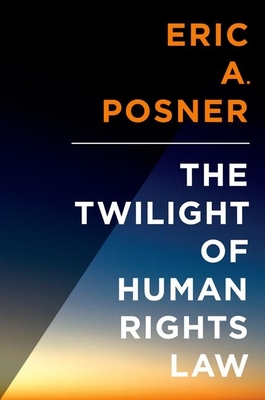 
Not On Our Shelves—Ships in 1-5 Days
Countries solemnly intone their commitment to human rights, and they ratify endless international treaties and conventions designed to signal that commitment. At the same time, there has been no marked decrease in human rights violations, even as the language of human rights has become the dominant mode of international moral criticism. Well-known violators like Libya, Saudi Arabia, and Sudan have sat on the U.N. Council on Human Rights. But it's not just the usual suspects that flagrantly disregard the treaties. Brazil pursues extrajudicial killings. South Africa employs violence against protestors. India tolerate child labor and slavery. The United States tortures. In The Twilight of Human Rights Law--the newest addition to Oxford's highly acclaimed Inalienable Rights series edited by Geoffrey Stone--the eminent legal scholar Eric A. Posner argues that purposefully unenforceable human rights treaties are at the heart of the world's failure to address human rights violations. Because countries fundamentally disagree about what the public good requires and how governments should allocate limited resources in order to advance it, they have established a regime that gives them maximum flexibility--paradoxically characterized by a huge number of vague human rights that encompass nearly all human activity, along with weak enforcement machinery that churns out new rights but cannot enforce any of them. Posner looks to the foreign aid model instead, contending that we should judge compliance by comprehensive, concrete metrics like poverty reduction, instead of relying on ambiguous, weak, and easily manipulated checklists of specific rights. With a powerful thesis, a concise overview of the major developments in international human rights law, and discussions of recent international human rights-related controversies, The Twilight of Human Rights Law is an indispensable contribution to this important area of international law from a leading scholar in the field.

Eric A. Posner teaches at the University of Chicago. He has written nine books and more than one hundred articles on international law, constitutional law, and other topics. He has written opinion pieces for the New York Times, Wall Street Journal, New Republic, Slate, and other popular media. He is a fellow of the American Academy of Arts and Sciences and a member of the American Law Institute.