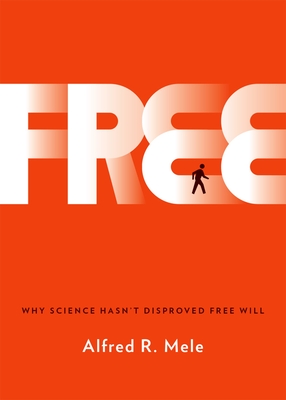 
Not On Our Shelves—Ships in 1-5 Days
Does free will exist? The question has fueled heated debates spanning from philosophy to psychology and religion. The answer has major implications, and the stakes are high. To put it in the simple terms that have come to dominate these debates, if we are free to make our own decisions, we are accountable for what we do, and if we aren't free, we're off the hook. There are neuroscientists who claim that our decisions are made unconsciously and are therefore outside of our control and social psychologists who argue that myriad imperceptible factors influence even our minor decisions to the extent that there is no room for free will. According to philosopher Alfred R. Mele, what they point to as hard and fast evidence that free will cannot exist actually leaves much room for doubt. If we look more closely at the major experiments that free will deniers cite, we can see large gaps where the light of possibility shines through. In Free: Why Science Hasn't Disproved Free Will, Mele lays out his opponents' experiments simply and clearly, and proceeds to debunk their supposed findings, one by one, explaining how the experiments don't provide the solid evidence for which they have been touted. There is powerful evidence that conscious decisions play an important role in our lives, and knowledge about situational influences can allow people to respond to those influences rationally rather than with blind obedience. Mele also explores the meaning and ramifications of free will. What, exactly, does it mean to have free will -- is it a state of our soul, or an undefinable openness to alternative decisions? Is it something natural and practical that is closely tied to moral responsibility? Since evidence suggests that denying the existence of free will actually encourages bad behavior, we have a duty to give it a fair chance.

Alfred R. Mele is the William H. and Lucyle T. Werkmeister Professor of Philosophy at Florida State University. He is the author of eight previous Oxford books, including Free Will and Luck (2006), Effective Intentions (2009), Backsliding (2012), and A Dialogue on Free Will and Science (2013). He also is the editor or co-editor of five OUP books, including The Philosophy of Action (1997) and Free Will and Consciousness: How Might They Work? (2010).