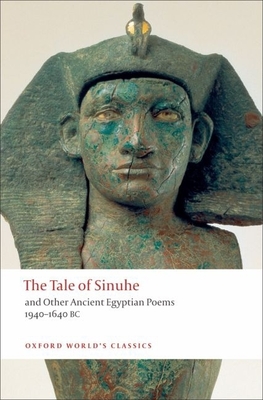 
Not On Our Shelves—Ships in 1-5 Days
Drawing on recent advances in Egyptology, R. B. Parkinson's new translations bring to life for the modern reader the golden age of Egyptian fictional literature, the Middle Kingdom (c. 1940-1640 BC). The book features The Tale of Sinuhe, acclaimed as the masterpiece of Egyptian poetry, which tells of a courtier's adventures after he flees Egypt. Other works include stories of fantastic wonders from the court of the builder of the Great Pyramid, a lyrical dialogue between a man and his soul on the nature of death and the problem of suffering, and teachings about the nature of virtue and wisdom, one of which is bitterly spoken from the grave by the assassinated king Amenemhat I, founder of the Twelfth Dynasty.
A general introduction discusses the historical context of the poetry, the nature of poetry, and the role of literature in ancient Egyptian culture., while a full set of notes explicates allusions, details of mythology, place-names, and the like. Parkinson's book provides, for the first time, a literary reading to enable these poems to entertain and instruct the modern reader, as they did their original audiences three-and-a-half thousand years ago. About the Series: For over 100 years Oxford World's Classics has made available the broadest spectrum of literature from around the globe. Each affordable volume reflects Oxford's commitment to scholarship, providing the most accurate text plus a wealth of other valuable features, including expert introductions by leading authorities, voluminous notes to clarify the text, up-to-date bibliographies for further study, and much more.