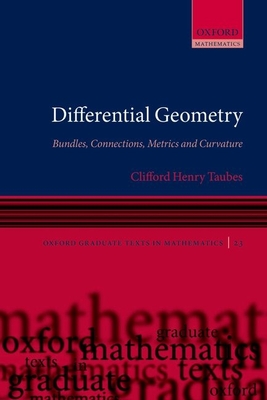 
Special Order—Subject to Availability
Bundles, connections, metrics and curvature are the 'lingua franca' of modern differential geometry and theoretical physics. This book will supply a graduate student in mathematics or theoretical physics with the fundamentals of these objects. Many of the tools used in differential topology are introduced and the basic results about differentiable manifolds, smooth maps, differential forms, vector fields, Lie groups, and Grassmanians are all presented here. Other material covered includes the basic theorems about geodesics and Jacobi fields, the classification theorem for flat connections, the definition of characteristic classes, and also an introduction to complex and Kahler geometry. Differential Geometry uses many of the classical examples from, and applications of, the subjects it covers, in particular those where closed form expressions are available, to bring abstract ideas to life. Helpfully, proofs are offered for almost all assertions throughout. All of the introductory material is presented in full and this is the only such source with the classical examples presented in detail.