Enlisting Masculinity: The Construction of Gender in Us Military Recruiting Advertising During the All-Volunteer Force (Oxford Studies in Gender and International Relations) (Hardcover) 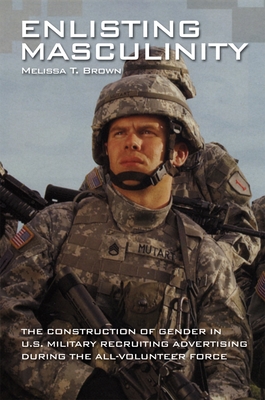 Enlisting Masculinity: The Construction of Gender in Us Military Recruiting Advertising During the All-Volunteer Force (Oxford Studies in Gender and International Relations) (Hardcover)


Not On Our Shelves—Ships in 1-5 Days
(This book cannot be returned.)
Is today's All-Volunteer Force still "This Man's Army"?
In a nation that has seen the rise of feminism, the decline of blue-collar employment, military defeat in Vietnam, and a general upheaval of traditional gender norms, what kind of man is today's military man? What kind does the military want him to be? In Enlisting Masculinity, Melissa Brown asks whether appeals to and constructions of masculinity remain the underlying basis of military recruiting-and if so, what that notion of masculinity actually is. Are the Army, Air Force, Navy, and Marines courting warriors or breadwinners; patriots or pragmatists; dominant masters of technology, or strong yet compassionate masters of themselves? Is each military branch recruiting the same model of masculinity? Based on an analysis of more than 300 print advertisements published between the early 1970s and 2007, as well as television commercials, recruiting websites, and media coverage of recruiting, Enlisting Masculinity argues that masculinity is still a foundation of the appeals made by the military, but that each branch deploys various constructions of masculinity that serve its particular personnel needs and culture, with conventional martial masculinity being only one among them. The inclusion of a few token women in recruiting advertisements has become routine, but the representations of service make it clear that men are the primary audience and combat their exclusive domain. Each branch constructs soldiering upon a slightly different foundation of masculine ideals and Brown delves into why, how, and what that looks like. The military is an important site for the creation and propagation of ideas of masculinity in American culture, and it is often not given the attention that it warrants as a nexus of gender and citizenship. Although most Americans believe they can ignore the military in the era of the all-volunteer force, when it comes to popular culture and ideas about gender, the military is not a thing apart from society. Building a fighting force, Brown shows, also means constructing a gender. Enlisting Masculinity gives us a unique and important perspective on both military service and prevailing conceptions of masculinity in America.