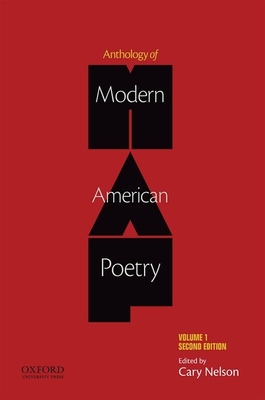 
Not On Our Shelves—Ships in 1-5 Days
Anthology of Modern American Poetry, Second Edition, contains poems by more than ninety American poets born before 1910, including many who have not been anthologized before. Editor Cary Nelson introduces students to a diverse selection of vital poetry, presenting both canonical and lesser-known selections by women, minority, Native American, and progressive writers only rediscovered in the past two decades. In addition to offering the most detailed annotations available in an anthology of this type and selected poems in the beautifully illustrated form in which they first appeared, this is also the first collection to give full treatment to American long poems and poem sequences. Ideal for courses in Modern American Poetry, American Literature, Modern Poetry, and American Studies, Anthology of Modern American Poetry introduces students our diverse poetic heritage.

Cary Nelson is Jubilee Professor of Liberal Arts and Sciences and Professor of English at the University of Illinois at Urbana-Champaign. He is the author or editor of 28 books, including Repression and Recovery: Modern American Poetry and The Politics of Cultural Memory, 1910-1945 (1989), which helped revolutionize the study of American poetry.