The Invention of Brownstone Brooklyn: Gentrification and the Search for Authenticity in Postwar New York (Paperback) 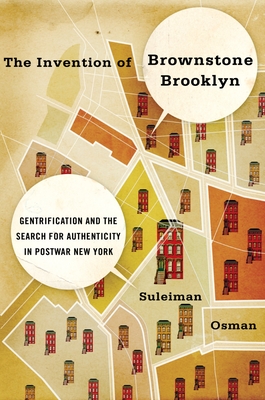 The Invention of Brownstone Brooklyn: Gentrification and the Search for Authenticity in Postwar New York (Paperback)


Not On Our Shelves—Ships in 1-5 Days
(This book cannot be returned.)
Considered one of the city's most notorious industrial slums in the 1940s and 1950s, Brownstone Brooklyn by the 1980s had become a post-industrial landscape of hip bars, yoga studios, and beautifully renovated, wildly expensive townhouses. In The Invention of Brownstone Brooklyn, Suleiman Osman offers a groundbreaking history of this unexpected transformation. Challenging the conventional wisdom that New York City's renaissance started in the 1990s, Osman locates the origins of gentrification in Brooklyn in the cultural upheavals of the 1960s and 1970s. Gentrification began as a grassroots movement led by young and idealistic white college graduates searching for "authenticity" and life outside the burgeoning suburbs. Where postwar city leaders championed slum clearance and modern architecture, "brownstoners" (as they called themselves) fought for a new romantic urban ideal that celebrated historic buildings, industrial lofts and traditional ethnic neighborhoods as a refuge from an increasingly technocratic society. Osman examines the emergence of a "slow-growth" progressive coalition as brownstoners joined with poorer residents to battle city planners and local machine politicians. But as brownstoners migrated into poorer areas, race and class tensions emerged, and by the 1980s, as newspapers parodied yuppies and anti-gentrification activists marched through increasingly expensive neighborhoods, brownstoners debated whether their search for authenticity had been a success or failure.

Suleiman Osman is Assistant Professor of American Studies at George Washington University. He grew up in Brooklyn's Park Slope and now lives in Washington, D.C.