The Border Within: The Economics of Immigration in an Age of Fear (Hardcover) 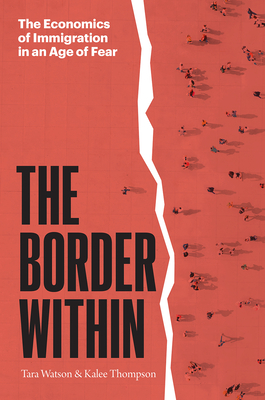 The Border Within: The Economics of Immigration in an Age of Fear (Hardcover)


In Stock—Click for Locations
An eye-opening analysis of the costs and effects of immigration and immigration policy, both on American life and on new Americans.

For decades, immigration has been one of the most divisive, contentious topics in American politics. And for decades, urgent calls for its policy reform have gone mostly unanswered. As the discord surrounding the modern immigration debate has intensified, border enforcement has tightened. Crossing harsher, less porous borders makes unauthorized entry to the United States a permanent, costly undertaking. And the challenges don’t end on the other side.

At once enlightening and devastating, The Border Within examines the costs and ends of America’s interior enforcement—the policies and agencies, including ICE, aimed at removing immigrants already living in the country. Economist Tara Watson and journalist Kalee Thompson pair rigorous analysis with deeply personal stories from immigrants and their families to assess immigration’s effects on every aspect of American life, from the labor force to social welfare programs to tax revenue. What emerges is a critical, utterly complete examination of what non-native Americans bring to the country, including immigration’s tendency to elevate the wages and skills of those who are native-born.

News coverage has prompted many to question the humanity of American immigration policies; The Border Within opens a conversation of whether it is effective. The United States spends billions each year on detention and deportation, all without economic gain and at a great human cost. With depth and discipline, the authors dissect the shock-and-awe policies that make up a broken, often cruel system, while illuminating the lives caught in the chaos. It is an essential work with far-reaching implications for immigrants and non-immigrants alike.
Kalee Thompson is a journalist and senior editor at Wirecutter. She is the author of Deadliest Sea: The Untold Story Behind the Greatest Rescue in Coast Guard History.
"A thoughtful, carefully written, historically informed description of U.S. interior immigration enforcement."
— Foreign Affairs

"In The Border Within, Watson and Thompson masterfully distill decades of economics research and interweave it with stories of real people. Anyone looking for a clear understanding of issues surrounding undocumented immigration in the United States, delivered in engaging prose, would do well to read this. It is a terrific book that gets the economics research right, makes it readable, and puts a human face on it. That is hard to do."
— Kristin F. Butcher, director of the Center on Children and Families, Cabot Family Chair, and senior fellow in Economic Studies, Brookings Institution, and the Marshall I. Goldman Professor of Economics, Wellesley College

"A very well written and carefully researched book on the benefits and costs of interior immigrant enforcement in the United States. With interesting background on US immigration policy that highlights the parallels between discrimination against new immigrants in the first globalization period and now, the authors have provided a clear and engaging presentation of the most important issues related to US immigration policy."
— Anna Maria Mayda, Georgetown University

"An excellent book with significant potential impact. The authors have done something quite novel: combined a review of the empirical social science evidence on the costs and benefits of undocumented immigration and the effects of various policies with personal stories about the lives of undocumented immigrants. The stories provoke an emotional, moral response, while the more scientific approach taken by the academic summaries provides evidence and rational calculations of costs and benefits. The writing is clear and propulsive, and the personal narratives lend a sense of urgency to the discussions of policy. If I were teaching a class on immigration economics, I would assign this book."
— Megan MacGarvie, Boston University Questrom School of Business