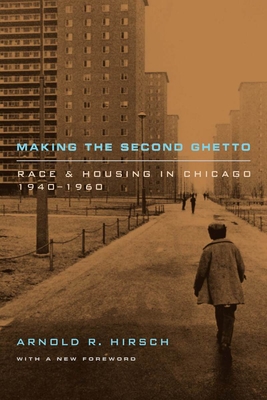 
Special Order—Subject to Availability
In Making the Second Ghetto, Arnold Hirsch argues that in the post-depression years Chicago was a "pioneer in developing concepts and devices" for housing segregation. Hirsch shows that the legal framework for the national urban renewal effort was forged in the heat generated by the racial struggles waged on Chicago's South Side. His chronicle of the strategies used by ethnic, political, and business interests in reaction to the great migration of southern blacks in the 1940s describes how the violent reaction of an emergent "white" population combined with public policy to segregate the city.

"In this excellent, intricate, and meticulously researched study, Hirsch exposes the social engineering of the post-war ghetto."—Roma Barnes, Journal of American Studies

"An informative and provocative account of critical aspects of the process in [Chicago]. . . . A good and useful book."—Zane Miller, Reviews in American History

"A valuable and important book."—Allan Spear, Journal of American History
Arnold R. Hirsch (1949-2018) was the Ethel and Herman L. Midlo Endowed Chair for New Orleans Studies at the University of New Orleans.