The Hidden Wealth of Nations: The Scourge of Tax Havens (Paperback) 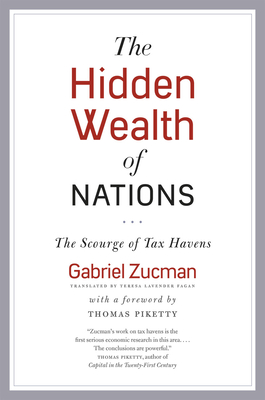 The Hidden Wealth of Nations: The Scourge of Tax Havens (Paperback)


Not On Our Shelves—Ships in 1-5 Days
We are well aware of the rise of the 1% as the rapid growth of economic inequality has put the majority of the world’s wealth in the pockets of fewer and fewer. One much-discussed solution to this imbalance is to significantly increase the rate at which we tax the wealthy. But with an enormous amount of the world’s wealth hidden in tax havens—in countries like Switzerland, Luxembourg, and the Cayman Islands—this wealth cannot be fully accounted for and taxed fairly. No one, from economists to bankers to politicians, has been able to quantify exactly how much of the world’s assets are currently hidden—until now. Gabriel Zucman is the first economist to offer reliable insight into the actual extent of the world’s money held in tax havens. And it’s staggering.

In The Hidden Wealth of Nations, Zucman offers an inventive and sophisticated approach to quantifying how big the problem is, how tax havens work and are organized, and how we can begin to approach a solution. His research reveals that tax havens are a quickly growing danger to the world economy. In the past five years, the amount of wealth in tax havens has increased over 25%—there has never been as much money held offshore as there is today. This hidden wealth accounts for at least $7.6 trillion, equivalent to 8% of the global financial assets of households. Fighting the notion that any attempts to vanquish tax havens are futile, since some countries will always offer more advantageous tax rates than others, as well the counter-argument that since the financial crisis tax havens have disappeared, Zucman shows how both sides are actually very wrong. In The Hidden Wealth of Nations he offers an ambitious agenda for reform, focused on ways in which countries can change the incentives of tax havens. Only by first understanding the enormity of the secret wealth can we begin to estimate the kind of actions that would force tax havens to give up their practices.

Zucman’s work has quickly become the gold standard for quantifying the amount of the world’s assets held in havens. In this concise book, he lays out in approachable language how the international banking system works and the dangerous extent to which the large-scale evasion of taxes is undermining the global market as a whole. If we are to find a way to solve the problem of increasing inequality, The Hidden Wealth of Nations is essential reading.

Gabriel Zucman is assistant professor of economics at the University of California, Berkeley.

Teresa Lavender Fagan is a freelance translator living in Chicago; she has translated numerous books for the University of Chicago Press and other publishers.

“Zucman’s work on tax havens is the first serious economic research in this area. His evaluation of the share of global household wealth that is located in tax havens has become the standard in the profession. Most importantly, this is the first work offering credible estimates of the kind of economic sanctions that would make tax havens give up the financial opacity that allows them to prosper. The conclusions are powerful.”
— Thomas Piketty, author of Capital in the Twenty-First Century

“Zucman seems to have little ambivalence about how to interpret the data, as his book is subtitled The Scourge of Tax Havens. He acknowledges that some view tax havens as perfectly legal and legitimate. But whatever the politics, for anyone who cares about understanding the economy, it’s clear a dramatic shift is under way.”
— Wall Street Journal

“With his book, The Hidden Wealth of Nations, Zucman is positioning himself as this year’s Piketty, whose opus renewed a debate about inequality last year. . . . There has never been as much wealth sitting in tax havens as there is today, Zucman says, whether it’s Apple Inc. funneling billions in profits through a tiny Irish unit or a French cabinet minister using secret accounts to cheat on his taxes. . . . What is to be done? Zucman said there needs to be a central global register of the owners of the world’s wealth, similar to various registries for real estate holdings. Such a database doesn’t have to be public, but it must be available to regulators.”
— Bloomberg Business News

“Zucman has built his career remarkably quickly, and in the process has made a place for himself among the most influential economists working today. . . . Stitching together data sets that chronicle roughly a century of offshore banking, Zucman shows how wealth in tax havens has grown to account for roughly 8% of total global household financial wealth, or roughly $7.6 trillion in 2014. . . . Armed with those figures, he makes the case that tax avoidance and evasion are at the core of the issues such as inequality and financial stability.”
— Quartz

“A short and lively investigation into the global effects of tax avoidance. . . . As Zucman argues, ‘Financial secrecy—like greenhouse gas emissions—has a costly impact on the entire world, which tax havens choose to ignore.”
— The Week

“A provocative new book. . . . In Piketty’s forward, he urges all those interested in inequality, global justice and the future of democracy to read the book. The wealthy among them might want to take particular note. Attacking tax havens is a crucial first step to ratcheting up taxation on the rich. The more information there is about offshore assets, the harder they will be to defend.”
— Financial Times

“Tax havens are by design secretive and opaque. The entire point of their existence is to conceal the wealth hidden within them. And a new book by Zucman, The Hidden Wealth of Nations: The Scourge of Tax Havens, reveals, as never before, the extent of their role in the global economy. . . . If we are ever to combat inequality effectively, truly progressive taxation will have to be a part of the policy mix. But unless we eliminate tax havens now, we are likely to find that we lack the ability to implement it.”
— Project Syndicate

“Zucman writes crisply and is forthright in his scorn for tax fraud. He also briefly addresses solutions to corporate tax manipulation, whereby multinationals shift income to tax havens. . . . Zucman’s eye-opening study will be of interest to all readers concerned about growing wealth disparity and is a fitting supplement to Capital in the Twenty-First Century by Thomas Piketty.”
— Library Journal, starred review

“Zucman is a sometime co-author with Thomas Piketty and his new book The Hidden Wealth of Nations is set to do for tax havens what his colleague’s did for wealth inequality: define and popularize the problem.”
— Guardian

“One of the most thorough books on the topic.”
— Le Monde

“A small book worth ten volumes on financial globalization. . . . Zucman dares to suggest to the leaders of democratic states ‘a concrete and realistic plan of action’ to fight against the fiscal hemorrhaging that is bleeding their public coffers and economies dry.”
— La Croix

“In this small, yet brilliant and tightly argued book, Zucman unravels the mechanisms of tax secrecy and evasion during the past century, an always lucrative activity but probably never as lucrative as it is today.  The amounts involved are staggering: one out of every ten dollars of financial assets is hidden in tax havens. Zucman proposes a whole gamut of measures to put an end to this scourge, and indeed those who benefit from financial secrecy must feel uncomfortable to have to face such a formidable opponent.”
— Branko Milanovic, City University of New York

“Offshore tax evasion is an outrage. Preventing it should be a major objective of international cooperation. This important book documents the problem and addresses what can be done. It is actionable economics at its finest.”
— Lawrence H. Summers, Harvard University

“Drawing on his recent pathbreaking research, Zucman offers a short, lively, and non-technical discussion of tax heavens. He presents the most rigorous measurement to date of the wealth hidden in tax heavens and proposes a clear and feasible set of recommendations to fight evasion through tax heavens and restore the ability of our democratic societies to tax their wealthiest residents in this globalized world. His recommendations are already having a significant policy impact.”
— Emmanuel Saez, University of California, Berkeley

“The book’s argument—that the rich steal from the rest of us by secreting their money away in tax havens—will please Bernie Sanders fans.”
— Wall Street Journal

“It is because Zucman takes the courageous step of moving beyond academia to being an activist committed to promoting a new and radical solution that he has unambiguously (even if cautiously) identified, that I welcome this book. Far too few academics are willing to take on the role of the public intellectual who steps up and demands action to address a problem that they have identified. Zucman deserves full marks for doing so.”

“Zucman’s main achievement in this slim volume is to have quantified these thefts: $200 billion in state revenues lost through private individuals’ use of tax havens, plus another $130 billion in losses created by U.S. firms booking their profits offshore.  . . . Zucman showcases this remarkable feat in unusually lucid and elegant prose—particularly for an economist—complemented by an admirable grasp of history. His review of the ways that efforts to combat tax evasion have stalled for the past century makes the book a worthwhile read in and of itself. But perhaps the most ambitious aspect of Zucman’s work is his claim that, despite the immense scale of the problem, there are ways to solve it and thereby put a stop to the recurrent economic and political crises triggered by the use of offshore finance. . . . Zucman is still at the beginning of what promises to be a brilliant career.”

“Zucman, a young French economist now at the London School of Economics and the University of California at Berkeley, has written a masterful survey of the origins, importance, and dangers of tax havens. The Hidden Wealth of Nations is a tremendously important contribution to the current discussion of how to adjust the world’s income-tax systems, which are over a century old, to the realities of the 21st century.”

"reads like Capital in the Twenty-First Century’s lost chapter.”
— Nation

“Gabriel Zucman has two goals in his new book, The Hidden Wealth of Nations: to specify the costs of tax havens, and to figure out how to reduce those costs. He writes with moral passion, even outrage; he sees tax havens as a ‘scourge.’”

“Zucman has produced an important book, above all because of his effort to calculate the magnitude of the world’s hidden wealth. . . . A strong virtue of Zucman’s book is that it puts a bright spotlight on an area in which significant reforms might appeal to people who otherwise disagree on a great deal. You might believe that the tax system should be made more progressive, or you might believe that it should be made less so. But whatever you think, you are unlikely to support a situation in which trillions of dollars are hardly taxed at all.”
— Cass Sunstein

“A short, pioneering guide to estimating the trillions of dollars moved to tax havens to evade or avoid paying taxes to the nations from which this expanding mountain of money was made. Zucman proposes measures to end the party of these giant tax escapes and make tax avoiders and evaders pay their fair share.”