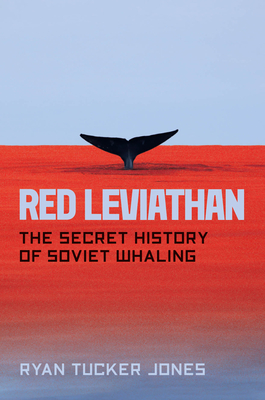 
In Stock—Click for Locations
A revealing and authoritative history that shows how Soviet whalers secretly helped nearly destroy endangered whale populations, while also contributing to the scientific understanding necessary for these creatures’ salvation.

The Soviet Union killed over six hundred thousand whales in the twentieth century, many of them illegally and secretly. That catch helped bring many whale species to near extinction by the 1970s, and the impacts of this loss of life still ripple through today’s oceans. In this new account, based on formerly secret Soviet archives and interviews with ex-whalers, environmental historian Ryan Tucker Jones offers a complete history of the role the Soviet Union played in the whales’ destruction. As other countries—especially the United States, Great Britain, Japan, and Norway—expanded their pursuit of whales to all corners of the globe, Stalin determined that the Soviet Union needed to join the hunt. What followed was a spectacularly prodigious, and often wasteful, destruction of humpback, fin, sei, right, and sperm whales in the Antarctic and the North Pacific, done in knowing violation of the International Whaling Commission’s rules. Cold War intrigue encouraged this destruction, but, as Jones shows, there is a more complex history behind this tragic Soviet experiment. Jones compellingly describes the ultimate scientific irony: today’s cetacean studies benefited from Soviet whaling, as Russian scientists on whaling vessels made key breakthroughs in understanding whale natural history and behavior. And in a final twist, Red Leviathan reveals how the Soviet public began turning against their own country’s whaling industry, working in parallel with Western environmental organizations like Greenpeace to help end industrial whaling—not long before the world’s whales might have disappeared altogether.
Ryan Tucker Jones is the Ann Swindells Associate Professor of history at the University of Oregon. He is the author of Empire of Extinction: Russians and the North Pacific’s Strange Beasts of the Sea, 1741–1867 and coeditor of Across Species and Cultures: New Histories of Pacific Whaling.
"A gripping and heart-breaking chronicle of the Soviet regime’s war (not a ‘conflict’, ‘special operation’ or any other euphemism) against the freedom of our natural environment and its inhabitants it wanted to dominate."
— Engineering and Technology

“Jones asks why the Soviets embarked on this irrational and destructive journey, and how they got away with it—until they didn’t. One answer (worth bearing in mind in view of the latest battleground over gas pipelines and wheat fields in Ukraine) is that pride, competition, and a sense of historical injustice motivated Soviet whaling far more than commercial considerations. . . . Ultimately it wasn’t economics or ideology but a growing spotlight on these practices that put an end to the carnage. . . . As whale populations begin to revive, Jones shows the power of a handful of environmental activists on tiny inflatable Zodiac boats, pushing back against a tide of destruction."
— Times Literary Supplement

“This is a really important story. Jones has set out to reframe much of what we know about twentieth-century environmental history, particularly of the oceans. His archival work is extraordinarily impressive, and the oral history interviews with Russian whalers and marine biologists are, to my knowledge, unique in English-language historical scholarship. But it is Jones’s incorporation of whale science and his own personal vignettes that make this book special. Soviet whaling had the single greatest impact on world whale populations in the postwar period, but no other historian has told its inside story. Red Leviathan is a game-changer.”
— Jason M. Colby, University of Victoria, author of "Orca: How We Came to Know and Love the Ocean's Greatest Predator"

“American environmentalists are inclined to see the United States’ Cold War opponent as a villain. Telling the story of the Soviet role in modern whaling, Jones complicates this perspective by acknowledging the Soviets’ disproportionate impact while also looking beyond it. He illuminates the contradictions and tensions among different players within the Soviet whaling industry—whalers, the whale scientists who worked with them, and other Russians not directly involved in but still impacted by and shaping the demands of the industry. From the first attempts at whaling in Peter’s Russia to the protest era and pushback against whaling by Greenpeace and the Sea Shepherds, Red Leviathan combines thorough research and great storytelling to fill a necessary gap in the history of global whaling.”
— Jakobina K. Arch, Whitman College, author of "Bringing Whales Ashore: Oceans and the Environment of Early Modern Japan"