King of the World: The Life of Louis XIV (Hardcover) 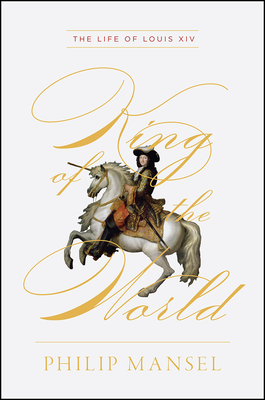 King of the World: The Life of Louis XIV (Hardcover)


In Stock—Click for Locations
Louis XIV was a man in pursuit of glory. Not content to be the ruler of a world power, he wanted the power to rule the world. And, for a time, he came tantalizingly close.

Philip Mansel’s King of the World is the most comprehensive and up-to-date biography in English of this hypnotic, flawed figure who continues to captivate our attention. This lively work takes Louis outside Versailles and shows the true extent of his global ambitions, with stops in London, Madrid, Constantinople, Bangkok, and beyond. We witness the importance of his alliance with the Spanish crown and his success in securing Spain for his descendants, his enmity with England, and his relations with the rest of Europe, as well as Asia, Africa, and the Americas. We also see the king’s effect on the two great global diasporas of Huguenots and Jacobites, and their influence on him as he failed in his brutal attempts to stop Protestants from leaving France. Along the way, we are enveloped in the splendor of Louis’s court and the fascinating cast of characters who prostrated and plotted within it.
King of the World is exceptionally researched, drawing on international archives and incorporating sources who knew the king intimately, including the newly released correspondence of Louis’s second wife, Madame de Maintenon. Mansel’s narrative flair is a perfect match for this grand figure, and he brings the Sun King’s world to vivid life.

This is a global biography of a global king, whose power was extensive but also limited by laws and circumstances, and whose interests and ambitions stretched far beyond his homeland. Through it all, we watch Louis XIV progressively turn from a dazzling, attractive young king to a belligerent reactionary who sets France on the path to 1789. It is a convincing and compelling portrait of a man who, three hundred years after his death, still epitomizes the idea of le grand monarque.
Philip Mansel is one of Britain’s leading historians of France and the Middle East. He is the author of many books, including, most recently, Aleppo: The Rise and Fall of Syria’s Great Merchant City; The Eagle in Splendour: Inside the Court of Napoleon; and Levant: Splendour and Catastrophe on the Mediterranean.
“Mansel has mastered a bewildering array of primary and secondary sources dealing with his man and his time period, and he’s invested his entire narrative with a kind of tightly compressed narrative energy that has the most unlikely effect imaginable: it turns a 600-page biography of King Louis XIV into a genuine page-turner of a reading experience. . . . One of the year’s grandest biographies.”
— Open Letters Monthly

“Mansel, building on his formidable reputation as the most stylish of historians of modern Europe, is as good at explaining and illustrating Louis’s decline as his ascendancy. . . . .Copiously, beautifully and intelligently illustrated, complemented by excellent maps and diagrams (notably a ground-plan of Versailles), King of the World is one of the most stimulating and enjoyable works on European history to have been published for many a long year.”

"Why did a king make such blunders? Mansel seeks to find out in this superior study that will appeal to history buffs and may become the go-to biography of Louis XIV."
— Library Journal

“Comprehensive and eminently readable, the book is enlivened by surprising facts about Louis, including how his voracious appetite in infancy (he is reported to have thoroughly exhausted eight wet nurses) foreshadowed his cult of self-glorification. . . .Enhanced by lavish, full-color illustrations and meticulous notes and references regarding France’s turbulent history and the lifestyle of its royal court, Mansel’s book reveals both the glory and depravity of Louis XIV’s reign.”

“A wonderfully meticulous look at Louis XIV (1638-1715) from a leading historian of France. . . . An impressive, comprehensive biography of the Sun King—a must-add to any Francophile's library.”

“You will find no more comprehensive biography of this extraordinary monarch who reigned from 1643–1715. . . . (Mansel's) genius in King of the World lies in unpacking the complexities of Louis’ royal court. The contrast is chillingly made between a starving country and the deplorable but engrossing ostentation of Louis’ most enduring creation: the Palace of Versailles.”
— Financial Times

“No other English-language biography has so successfully given us a portrait of [Louis] as man and monarch. . . . Mansel treads the line between the academic and the accessible effectively, explaining the context of the French monarchy, diplomacy, medicine, Catholicism, queenship, fashion and art.”
— Times Literary Supplement

“The best single-volume account of the reign in any language.”
— Sunday Times

“To my mind, Mansel should also make the cut as a contemporary polymath. He’s an expert on both France and the Middle East, having produced histories of Constantinople and the Levant, a biography of the dashing Prince de Ligne and, this fall, the appropriately monumental King of the World.”