The Beautiful Cure: The Revolution in Immunology and What It Means for Your Health (Paperback) 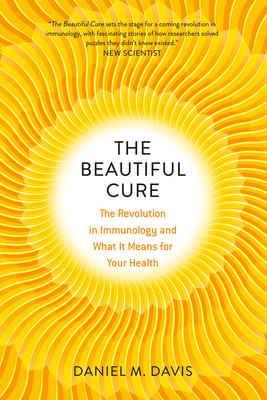 The Beautiful Cure: The Revolution in Immunology and What It Means for Your Health (Paperback)

The immune system holds the key to human health. In The Beautiful Cure, leading immunologist Daniel M. Davis describes how the scientific quest to understand how the immune system works—and how it is affected by stress, sleep, age, and our state of mind—is now unlocking a revolutionary new approach to medicine and well-being.

The body’s ability to fight disease and heal itself is one of the great mysteries and marvels of nature. But in recent years, painstaking research has resulted in major advances in our grasp of this breathtakingly beautiful inner world: a vast and intricate network of specialist cells, regulatory proteins, and dedicated genes that are continually protecting our bodies. Far more powerful than any medicine ever invented, the immune system plays a crucial role in our daily lives. We have found ways to harness these natural defenses to create breakthrough drugs and so-called immunotherapies that help us fight cancer, diabetes, arthritis, and many age-related diseases, and we are starting to understand whether activities such as mindfulness might play a role in enhancing our physical resilience.

Written by a researcher at the forefront of this adventure, The Beautiful Cure tells a dramatic story of scientific detective work and discovery, of puzzles solved and mysteries that linger, of lives sacrificed and saved. With expertise and eloquence, Davis introduces us to this revelatory new understanding of the human body and what it takes to be healthy.
Daniel M. Davis is professor of immunology at the University of Manchester in the UK. He is the author of The Compatibility Gene: How Our Bodies Fight Disease, Attract Others, and Define Our Selves, which was picked by Bill Bryson for the Guardian’s Books of the Year feature.
"The Beautiful Cure . . . focuses on the science of immunology itself, taking us through the evolution of the discipline and the stories behind key advances in the field. . . . Davis conveys a visceral appreciation for how messy, and how human, medical science can be."
— David A. Shaywitz

"Davis leaves readers with a reminder that, for all the scientific innovations described here, the human immune system remains 'far more powerful than any medicine we have devised,' and that sleep, healthy eating, mindfulness, and other complementary practices all appear to help. A modern equivalent of Paul de Kruif’s 1926 classic, Microbe Hunters, Davis’s work is concise and illuminating."
— Publishers Weekly

"Davis endeavors to tell the story of human immunology in eight chapters, spanning foundational concepts, pivotal discoveries by brilliant scientists and their collaborators, the personal drama that has accompanied Nobel prizes and other recognition awarded in this highly competitive field, and anecdotes about how individual choices can affect one’s immune function and overall health. . . . A heroic effort. . . . The relatively brief overview reveals intriguing connections in immunology’s history, helps tie together stove-piped areas of inquiry, and offers fresh perspective on future research strategies."
— Audrey R. Glynn

"Davis came to immunology from physics and, like visions of outer space, his picture of the human immune system—the little we actually know of it—is dizzying, intriguing, and strange. . . . Emphasizing that ‘no scientist is an island,’ Davis follows the strings of achievements and failures (always at least as valuable as the successes) that have led to radical reinterpretations of how the immune system works. His explanations are rich in technical detail, but always clear: as he recreates the revelatory moments in the labs, he puts the reader right there at the microscope, on the edge of discovery. I was surprised how quickly I became (temporarily) fluent in the language of dendritic cells, receptors, cytokines, and so on. Davis also clearly defines more familiar terms such as interferons and interleukins, explains cortisol’s effects and how it’s related to cortisone, and flags the truly revolutionary insights in this history of sometimes baffling eureka moments."
— Laurie G.

"Davis deftly sketches the history of immune science and the surprising discoveries made by scientists who were initially ridiculed by their peers—the man who first named interferon, an antiviral agent in the blood, was met with disbelief by colleagues who jokingly called it ‘misinterpreton.’ Today, scientists are successfully tinkering with our natural immune response in the molecular equivalent of taking the brakes off, so that our hunter-killer cells launch war against tumors."
— Telegraph, "Best Books of 2018"

"The Beautiful Cure sets the stage for a coming revolution in immunology, with fascinating stories of how researchers solved puzzles they didn’t know existed."
— Jeremy Webb

"A terrific book by a consummate storyteller and scientific expert considers the past and future of the body’s ability to fight disease and heal itself. . . . We should all pay more attention to understanding the barricades that evolution has provided us with, that we have learned to train, because this war is endless. The Beautiful Cure is a worthy guide."
— Adam Rutherford

"Five stars. We all think we know, at a rough level, how the immune system works. Cells in the blood identify foreign invaders and go into battle with them. Inflammation and perhaps a fever develop, and eventually the body destroys the illegal immigrants. From then on their card is marked: the system remembers the microscopic terrorists, and if they ever reappear they are ganged up on and eliminated immediately. That’s immunity. In recent decades, though, the scientific picture has become hugely more complicated, as the immunologist Davis relates in this elegantly concise book."
— Steven Poole

"Davis’s wonderful book The Beautiful Cure recounts how research into the immune system in recent decades has resulted in what amounts to a health revolution. Immunotherapy drugs are now worth billions of dollars, and cancers and autoimmune diseases that were once considered untreatable can now be fought and, in a few cases, even cured. There is little doubt that there will be further progress in the years to come. Davis recounts in exceptionally clear and sympathetic prose how all this came about."
— Henry Marsh

"Forget AI, robotics, the internet of things. This is where the future feels strange and exciting: in ourselves, in the 'inner universe' of our messy, complex immune system, and in the radically new therapies that are using it to conquer disease. Davis is passionate about the possibilities of his field. . . . He describes how these cells perform with the fervor of an enraptured dance critic. . . . Davis is right to call the immune system an inner universe. It is just as consciousness-raising and awe-inspiring as the outer universe of black holes and supernovas, yet far less widely known or understood. This eye-opening if demanding book starts to put that right."
— James McConnachie

"The Beautiful Cure is about the history and future of immunology. It is a sweeping tour d’horizon that never shies from complexity but manages, impressively for a science book by a scientist, to remain lucid and entertaining enough to take the reader with it. Much as Siddhartha Mukherjee did in his book The Gene, Davis expertly weaves together human stories and scientific endeavor to give a sense of the grand global collaboration that is still under way to understand 'the complexity, delicacy, and elegance of our immune system.' . . . If anything can be taken from this book it is that life and its mechanisms are too complex for neat stories, however satisfying those stories may be."
— Tom Whipple

"Davis is a sure and engaging guide to these developments. . . . In each case, Davis shows how these scientific thinkers overturned the previous dogma and progressively deepened the story of immunology. His message is that although knowledge of the immune system has come on in leaps and bounds in the past hundred years, immunology still lacks a unifying theory. 'We must not expect everything the immune system does to fit any one over-arching principle,' he concludes. 'The system discriminates between self and non-self, and it detects germs, and it responds to danger, and it does all these things concurrently—and messily.'"
— Mark Honigsbaum

"An inspirational book that not only reveals the 'secret joys' of scientific discovery but is jam-packed full of revelations for non-scientists."
— Jon Dennis

"A layman’s introduction to the current state of the science of immunology. It is not an easy read, not because Davis is wilfully obscure but because his subject matter is extremely complex. Explanations should be as clear as possible, but not clearer than possible."
— Anthony Daniels

"An eye-opening tour de force of scientific writing that reads like the best kind of adventure story. As David Attenborough opens our goggling eyes to the natural world without, so Davis brings us face to face with the stunningly clever and, yes, beautiful world within—our immune system. One of those books that makes you look at everything human in a new, challenging, and thrilling way."
— Stephen Fry

"The human body is the most complicated assemblage of chemicals in the known universe. It's a huge scientific challenge to understand how we metabolize, how we acquire immunity, and how drugs work. Daniel Davis is a distinguished expert in this field—and he's a fine writer too. He portrays vividly how great discoveries emerge—via prolonged effort, via cooperation and competition, and sometime sheer luck. This gripping book gives an authentic flavor of how science is actually done—and why it's important for humanity's future."
— Martin Rees

"This book is an insight into new, remarkable, and almost unnoticed advances in immunology and shows how medicine is moving on from the world of the gene to the world of the antibody."
— Steve Jones

"Gives extraordinary new details of an ancient remedy that is already more marvelous, powerful, and flexible than any medicine to come out of a lab."
— Roger Highfield

"Davis is a leading immunologist himself and writes gracefully about a subject he knows well, brings alive not only the science, but the scientists themselves, many of whom he knows personally. The Beautiful Cure will give you a new appreciation for the marvels of our biology."
— Medium

"Immunology is notoriously hard for non-specialists to understand. . . . Fortunately, despite being in the midst of a glittering career in immunology, Davis has found the time to introduce us to this world with this book. The text unfolds like a thriller, admitting us into the minds of the protagonists as they strive to push the boundaries of understanding forward. The author allows the tension to build, withholding the answers, so that we share the puzzlement, uncertainty and suppressed excitement of the search until the moment of discovery. It was exciting for me; and I already knew the answers! The Beautiful Cure explains the importance of the relationship between the ancient innate immune system and the adaptive immune system which evolved later, conferring the power of immune memory—the basis for all successful vaccination. Although it all makes sense in the end and combines into a beautiful whole, the truth was very far from obvious until late in the twentieth century, and we share the uncertainties, the frustrations, and the battles to succeed."
— Five Books