A Fistful of Shells: West Africa from the Rise of the Slave Trade to the Age of Revolution (Paperback) 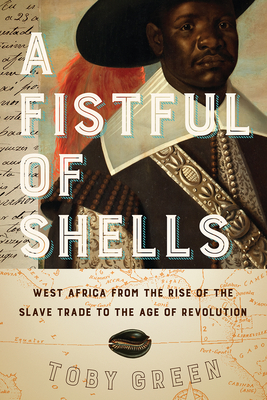 A Fistful of Shells: West Africa from the Rise of the Slave Trade to the Age of Revolution (Paperback)


Not On Our Shelves—Ships in 1-5 Days
By the time the “Scramble for Africa” among European colonial powers began in the late nineteenth century, Africa had already been globally connected for centuries. Its gold had fueled the economies of Europe and the Islamic world for nearly a millennium, and the sophisticated kingdoms spanning its west coast had traded with Europeans since the fifteenth century. Until at least 1650, this was a trade of equals, using a variety of currencies—most importantly, cowrie shells imported from the Maldives and nzimbu shells imported from Brazil. But, as the slave trade grew, African kingdoms began to lose prominence in the growing global economy. We have been living with the effects of this shift ever since.

With A Fistful of Shells, Toby Green transforms our view of West and West-Central Africa by reconstructing the world of these kingdoms, which revolved around trade, diplomacy, complex religious beliefs, and the production of art. Green shows how the slave trade led to economic disparities that caused African kingdoms to lose relative political and economic power. The concentration of money in the hands of Atlantic elites in and outside these kingdoms brought about a revolutionary nineteenth century in Africa, parallel to the upheavals then taking place in Europe and America. Yet political fragmentation following the fall of African aristocracies produced radically different results as European colonization took hold.

Drawing not just on written histories, but on archival research in nine countries, art, oral history, archaeology, and letters, Green lays bare the transformations that have shaped world politics and the global economy since the fifteenth century and paints a new and masterful portrait of West Africa, past and present.
Toby Green is a senior lecturer in Lusophone African history and culture at King’s College London and is author of The Rise of the Trans-Atlantic Slave Trade in Western Africa, 1300–1589.
"This meticulously researched book, based on archival research in nine countries, lays out a comprehensive overview of the economic history of West Africa and West-Central Africa before and after the slave trade. . . . A valuable history written in an accessible style."
— Publishers Weekly

"A Fistful of Shells, Green’s survey of the economic history of West African slave-trading states from the Niger valley to the drainage area of the Zaire, is exemplary: scholarly, sensitive, enlightening and often vivid. The author, a lecturer at King’s College London, does much more than make Africa seem normal. He proclaims a daunting ambition: to explore the local and global implications of West Africa’s economies during the age of slavery. He succeeds."
— Wall Street Journal

"Drawing on written accounts and oral histories from nine countries, Green traces the long-term consequences of a European-dominated capitalist system that gave rise to mounting inequality and political upheaval in West and West-Central Africa. . . . Summing Up: Essential."
— CHOICE

"His book is a work of staggering scholarship, drawing on previously untapped sources locked away in European vaults and historical records which, taken as a whole, contradict the age-old perceptions foisted on Africa."
— Telegraph (UK)

"A rich and insightful work. . . . What emerges is a radically different view of the region from the one that has been generally available. West Africa, according to Green, was both cosmopolitan in its outlook, culturally and politically sophisticated and in some ways globally connected long before Europeans arrived to ‘civilise the natives.' . . . Green concludes by pointing to the lack of history being taught in schools and universities in West Africa and elsewhere; if it is taught at all, it tends to focus on the slave trade. A Fistful of Shells shows that there was so much more, and of so much relevance when looking at the issues of our own time."
— Spectator

"All too often, the history of early modern Africa is told from the perspective of outsiders. In his book A Fistful of Shells: West Africa from the Rise of the Slave Trade to the Age of Revolution, Toby Green draws upon a range of underutilized sources to describe the evolution of West Africa over a period of four transformative centuries. With these sources Green demonstrates that the region was integrated into the developing transcontinental trade networks far earlier than is often portrayed in more Western-centric accounts, and in ways that influenced the development of local communities long before European ships arrived off of their coast."
— New Books Network

"One of its great strengths is that it reveals the often surprising success that Africans had throughout the first four hundred years of their encounter with Europe. . . . [a] sprawling and nuanced look at the steady depletion of a continent with a powerful lament about the lack of academic interest in Africa’s precolonial eras."
— New York Review of Books

"Green’s A Fistful of Shells illuminates the flourishing and connected economy of West Africa that existed long before a European capitalist system established itself on the continent. Extraordinarily written and researched, the book paints a huge, complex canvas, crammed with individual detail."
— Julia Lovell

"A Fistful of Shells is the fruit of research conducted in the archives of nine nations and required the author to undertake fieldwork across eight West African states. It shows. Passages from the author’s travels provide observations and anecdotes that usefully link the past to the present day and give voice to the lives and experiences of African themselves. Ranging far beyond economics, Green’s thesis becomes, ultimately, an almost philosophical meditation on the nature of value across differing cultures and societies during a long and underexamined era of early globalisation."
— New Statesman

"Green doesn’t conjure a nostalgic vision of a 'merrie Africa' before European contact. Rather, he shows that cultural and commercial ties connecting west Africa to the wider world existed and flourished long before the consolidation of a capitalist system dominated by Europe and its settler-colonies. What was lost in the acceleration of western capitalism was a more generous, expansive and flexible idea of equality."
— The Guardian

"This original and thoughtful work is based on detailed first-hand knowledge of and collaboration with the cultures and peoples it depicts. Green uses a combination of documentary sources, both primary and secondary (many previously unexplored by European scholars), material culture and oral sources, including both extensive local collections and literature such as the Sunjata epic, skilfully woven into a persuasive and insightful narrative. . . . For all its impressive scholarship A Fistful of Shells is notably readable, supported by great illustrations and a stunning cover – and, in the best sense, personal."
— Times Higher Education

"Toby Green is uniquely qualified to evoke its breathtaking cultural diversity and the sophistication of its civilisations, having travelled extensively through the region over a period of two decades and immersed himself in its archives as well as its oral history and performance culture."
— Literary Review

"The concept that is still prevalent in the West – that African history only really began when Europeans arrived – is a concept that still needs debunking. And author Toby Green, through dint of travel to West Africa and diligent research of archives in nine nations, has done just that, writing a remarkable book in the process."
— African Business Magazine

"For both Africanists and non-Africanists, this book sets by way of example a commanding challenge to finally dispense with habits of mind dating from the Atlantic slave trade era which unwittingly reduce Africa’s historical importance and generative power, and to start making the connections which reveal West Africa’s dynamic history within its shores and within the Atlantic world."
— Labour/ Le Travail

"a groundbreaking book. He brings together almost everything known about the economic history of the West African empires and peoples until the beginning of the 19th century in a coherent vision."
— de Volkskrant

“This impressive and welcome book engages with the new wave of studies on African economic history and places African societies at the center of global events. Green interrogates and historicizes state failure, violence, corruption, military ideologies, commodification, and globalization, convincingly arguing that roots of many of the current political and economic problems in Africa lie in the past. It is timely, relevant, and necessary in today’s political and economic environment.”
— Mariana Candido, University of Notre Dame

"A 'Fistful of Shells' implies a materialist approach to western African history but Green is far more ambitious in synthesizing the scholarship that has emerged over the past several decades. He is as concerned with political history, the role of religion, and artistic achievements as he is with the economy. Hence, the books succeeds as an introduction, admittedly a very long and detailed one, to the history of western Africa and hence will enable non-specialists to acquire an overview that will help correct the continuing relative ignorance of African history among non-specialists and students."
— Journal of Global Slavery

"Green has written an important, well-researched, and highly enjoyable book. This volume is a major contribution to the ‘renaissance of African economic history’ and speaks to many ongoing debates that are relevant both within and outside academia...in the coming years this volume will be a must-read for all scholars, students, and general readers interested in the economic past of African societies both on the continent and in the diaspora."
— Karin Pallaver

"...a necessarily dense but highly accessible history of the rise and fall of the early modern nations of West Africa, covering a region ranging from present day Senegal to Angola."
— Big Issue North