A Righteous Smokescreen: Postwar America and the Politics of Cultural Globalization (Hardcover) 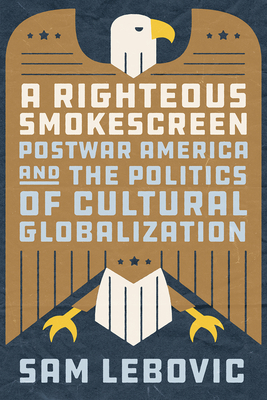 A Righteous Smokescreen: Postwar America and the Politics of Cultural Globalization (Hardcover)


Backordered
An examination of how the postwar United States twisted its ideal of “the free flow of information” into a one-sided export of values and a tool with global consequences.

When the dust settled after World War II, the United States stood as the world’s unquestionably pre-eminent military and economic power. In the decades that followed, the country exerted its dominant force in less visible but equally powerful ways, too, spreading its trade protocols, its media, and—perhaps most importantly—its alleged values. In A Righteous Smokescreen, Sam Lebovic homes in on one of the most prominent, yet ethereal, of those professed values: the free flow of information. This trope was seen as capturing what was most liberal about America’s self-declared leadership of the free world. But as Lebovic makes clear, even though diplomats and public figures trumpeted the importance of widespread cultural exchange, these transmissions flowed in only one direction: outward from the United States. Though other countries did try to promote their own cultural visions, Lebovic shows that the US moved to marginalize or block those visions outright, highlighting the shallowness of American commitments to multilateral institutions, the depth of its unstated devotion to cultural and economic supremacy, and its surprising hostility to importing foreign cultures. His book uncovers the unexpectedly profound global consequences buried in such ostensibly mundane matters as visa and passport policy, international educational funding, and land purchases for embassies. Even more crucially, A Righteous Smokescreen does nothing less than reveal that globalization was not the inevitable consequence of cultural convergence or the natural outcome of putatively free flows of information—it was always political to its core.
Sam Lebovic is associate professor of history at George Mason University and the author of Free Speech and Unfree News: The Paradox of Press Freedom in America.
"How did cultural globalization in the twentieth century travel along such a one-way path? And why is the U.S.—that globe-bestriding colossus with more than 700 overseas bases—so strangely isolated? The answer, Sam Lebovic’s new book, A Righteous Smokescreen, convincingly argues, largely comes down to American policy in the middle decades of the twentieth century. . . . [Lebovic's] approach is wildly innovative and helps us dramatically rethink the postwar US and the limits to the world order it helped construct."
— The New Republic

“This is an absolutely stupendous book. If you've ever wondered how globalization became so asymmetric—with one country filling the airways with its movies, sports, and news—Lebovic shows you. A Righteous Smokescreen is a brilliant history of the rise of the United States’ information empire.”
— Daniel Immerwahr, author of How to Hide an Empire: A History of the Greater United States

“Lebovic’s focus on ‘quotidian world-ordering’ reveals anything but ordinary findings. He convincingly argues for the importance of US institutional politics in the making of cultural globalization, showing how bureaucrats’ decisions shaped millions of lives in realms as disparate as education, information, and travel. Erudite and accessible at the same time, Lebovic’s book revises our understanding of phenomena from passports to the press. Few books show why bureaucrats matter with such verve and precision.”
— Heidi Tworek, author of News from Germany: The Competition to Control World Communications, 1900–1945

“How free was information in the post-World War II era of US liberal internationalism? In this brilliant, necessary book, Lebovic dispels a smokescreen of lofty, liberatory rhetoric, painstakingly reconstructing and incisively analyzing the political, institutional, and technical hard-wiring of a deeply uneven and unequal global information landscape. A Righteous Smokescreen will be indispensable for historians of US internationalism and media politics, and anyone interested in globalization’s past and present.”
— Paul A. Kramer, author of The Blood of Government: Race, Empire, the United States and the Philippines