Pure Adulteration: Cheating on Nature in the Age of Manufactured Food (Paperback) 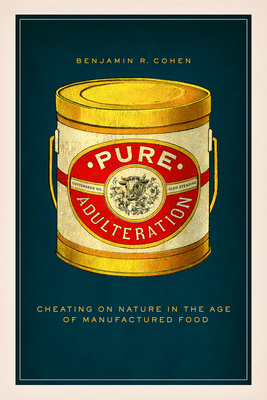 Pure Adulteration: Cheating on Nature in the Age of Manufactured Food (Paperback)


Not On Our Shelves—Ships in 1-5 Days
Benjamin R. Cohen uses the pure food crusades at the turn of the twentieth century to provide a captivating window onto the origins of manufactured foods in the United States.

In the latter nineteenth century, extraordinary changes in food and agriculture gave rise to new tensions in the ways people understood, obtained, trusted, and ate their food. This was the Era of Adulteration, and its concerns have carried forward to today: How could you tell the food you bought was the food you thought you bought? Could something manufactured still be pure? Is it okay to manipulate nature far enough to produce new foods but not so far that you question its safety and health? How do you know where the line is? And who decides?

In Pure Adulteration, Benjamin R. Cohen uses the pure food crusades to provide a captivating window onto the origins of manufactured foods and the perceived problems they wrought. Cohen follows farmers, manufacturers, grocers, hucksters, housewives, politicians, and scientific analysts as they struggled to demarcate and patrol the ever-contingent, always contested border between purity and adulteration, and as, at the end of the nineteenth century, the very notion of a pure food changed.

In the end, there is (and was) no natural, prehuman distinction between pure and adulterated to uncover and enforce; we have to decide. Today’s world is different from that of our nineteenth-century forebears in many ways, but the challenge of policing the difference between acceptable and unacceptable practices remains central to daily decisions about the foods we eat, how we produce them, and what choices we make when buying them.
Benjamin R. Cohen is associate professor at Lafayette College. He is the author of Notes from the Ground: Science, Soil, and Society in the American Countryside and the coeditor of Acquired Tastes: Stories about the Origins of Modern Food and Technoscience and Environmental Justice: Expert Cultures in a Grassroots Movement.
"As Benjamin R. Cohen notes in his thoughtful book Pure Adulteration, it is difficult to find a time or a place in history that lacks purveyors of food and drink attempting to cheat their unsuspecting customers. [Cohen] brings up the age-old problem of adulteration as essential context for his more recent case study of the underlying issues. . . . [He asks] a range of provocative and intriguing questions about U.S. food systems. What, for example, does this fight for food purity tell us about the changing nature of the country; its shifting culture, commerce, and politics; and its emerging scientific power?"
— Science

"Well-written and deftly crafted. . . . Cohen’s book is a compelling read that combines colourful characters and fascinating geographies of commodities and cultures with important philosophical and intellectual discussions over what constitutes food or fraud. This book is a timely one as debates over food regulation and standards likely will dominate future trade talks between the US, Britain and other territories across the world."
— Ambix

"Cohen is a historian and engineer, and his book is erudite and whimsical, richly documented with vintage advertisements and production statistics. . . . [He] walks us through a formative moment."
— Literary Review of Canada

"Good food writing makes you think about what you eat in a different way. Good food history helps explain how and why we eat what we eat now. The fact that Benjamin Cohen can accomplish both of these tasks simultaneously is a considerable achievement. . . . Pure Adulteration masterfully explains the complicated early days of a movement that is more relevant to today's times than ever before."
— Agricultural History

"Pure Adulteration does a great job of explaining the complicated interrelationships of various industries (like cottonseed with wheat and pork) and the ways that new food products affected international trade. . . . The work is perhaps at its most intriguing when it reveals the many ways foods and racial prejudice have been interconnected. . . . Made enjoyable by Cohen’s gentle, witty voice and crystal-clear writing style. Illuminating and enjoyable."
— Culinary Historians of Canada

"Cohen explains how the ideal of purity and the sin of adulteration came to shape which foods Americans viewed as acceptable and which as unacceptable at a time when they had decreasing control over how food was produced. . . . Cohen’s thoughtful argument is made stronger by his cogent writing as well as numerous illustrations. His writing is clear and precise, striking an enjoyable balance between the formal and the informal. It has become common for historians to make more use of the first person to give readers entrée into a complex narrative, but not everyone weaves together the different tones with the skill that Cohen does."
— H-Soz-Kult

" 'Trusting food meant trusting people.' This truth, as well as many of the anxieties of America’s Gilded Age chronicled by Benjamin R. Cohen in Pure Adulteration, resonates strongly in the twenty-first century. Indeed, it is remarkable how little ideological, and psychological, distance has been covered. . . . Cohen depicts a cat-and-mouse game between ever-adapting adulterers and 'pure food' crusaders, which set the tone for our current labyrinth of regulation. . . . The products have changed, but the moral handwringing and naturalistic nostalgia continue."

"Cohen offers a fresh take on familiar tales of food fraud and its detection. . . . Pure Adulteration is a breezy read. Cohen draws upon colorful anecdotes and characters to make the story of food adulteration entertaining and compelling. He also makes excellent use of visual evidence to reinforce his vivid storytelling, including maps of commodity flows and political cartoons. . . . Pure Adulteration analyzes the pure food crusades on food fraud but lets the reader decide if they leave a bitter taste in the mouth."
— Environmental History

"Engaging and accessible . . . this work will likely find an audience among general readers as well as those studying American history or food science. . . . Recommended. All readers."
— CHOICE

"Never have analytical chemists had a quirkier and more entertaining chronicler. This is not dry organizational history. . . . Like the nineteenth-century foods it explicates, Pure Adulteration satisfies precisely because it recombines familiar ingredients—in this case, cultural, economic, and intellectual history—in a novel form. It is genuinely good history by any measure."
— Journal of the Gilded Age and Progressive Era

"A much-needed fresh take on the era of adulteration. . . . Cohen’s work sits alongside other recent works that unpack notions of purity showing us that even in scientific contexts the 'pure' is always a complex and shifting composite of culture, morality, and power. . . . Using digital maps to trace production and trade, Cohen also adds to the growing work at the intersection of food studies and environmental history, which help us to see the consumer side of food systems as fundamentally connected to labor, agriculture, advertising, and science. . . . Cohen seamlessly weaves his historical analysis together with personal anecdotes and fascinating insights, making this book a fun and exciting read. It is an approachable book for undergraduate students or general readers, but will also offer compelling insights for scholars of the nineteenth-century U.S. interested in food, environment, consumerism, and regulatory policy."
— Food, Culture & Society

"There is little to criticize in terms of Cohen's research and reach into the relevant scholarly literature. . . . The work engages with and gives cultural structure to questions that persist to this day. Pure Adulteration deserves a wide audience, consisting of both scholars and the general public alike, and will reward them for the effort."
— Journal of American History

"Cohen has assembled a compelling set of stories, recounting the deeds of food charlatans and chemists of various stripes, and uses these stories to open up his serious exploration of the place of food in modernity’s radical reorientation of relations with nature. It’s a work of revelation, uncovering the many hidden ingredients that have gone into the foods we consume."
— Douglas C. Sackman, author of Orange Empire: California and the Fruits of Eden

"A richly detailed, intellectually sophisticated account of the conflicts at the core of our personal and social identities. Cohen wears his learning lightly and knows how to tell a good story, so the book is a pleasure to read as well as a fresh and illuminating perspective on a central theme in American cultural history."
— Jackson Lears, author of Rebirth of a Nation: The Making of Modern America, 1877–1920

"What makes some foods pure and real and others not? Cohen traces the colorful history—and geography—of this question. Timely and engaging, Pure Adulteration shows that industrialization changed not just where food comes from but also where and to whom we look for reasons to trust it."
— Susanne Freidberg, author of Fresh: A Perishable History

"Cohen’s important book corrects standard narratives of adulteration and regulation, which tend to give outsized credit to Harvey Wiley and The Jungle. He demonstrates persuasively that American ideas about ‘purity’ changed enormously over the time period he considers, moving from an experiential and primarily agricultural concept to a consumer-oriented standard whose ultimate arbiter was laboratory analysis."
— Helen Zoe Veit, Michigan State University