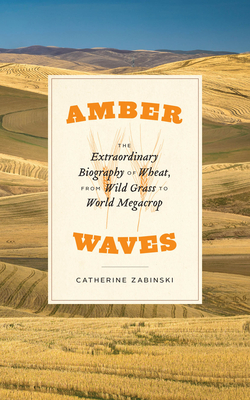 
In Stock—Click for Locations
A biography of a staple grain we often take for granted, exploring how wheat went from wild grass to a world-shaping crop.

At breakfast tables and bakeries, we take for granted a grain that has made human civilization possible, a cereal whose humble origins belie its world-shaping power: wheat. Amber Waves tells the story of a group of grass species that first grew in scattered stands in the foothills of the Middle East until our ancestors discovered their value as a source of food. Over thousands of years, we moved their seeds to all but the polar regions of Earth, slowly cultivating what we now know as wheat, and in the process creating a world of cuisines that uses wheat seeds as a staple food. Wheat spread across the globe, but as ecologist Catherine Zabinski shows us, a biography of wheat is not only the story of how plants ensure their own success: from the earliest bread to the most mouthwatering pasta, it is also a story of human ingenuity in producing enough food for ourselves and our communities.

Since the first harvest of the ancient grain, we have perfected our farming systems to grow massive quantities of food, producing one of our species’ global mega crops—but at a great cost to ecological systems. And despite our vast capacity to grow food, we face problems with undernourishment both close to home and around the world. Weaving together history, evolution, and ecology, Zabinski’s tale explores much more than the wild roots and rise of a now-ubiquitous grain: it illuminates our complex relationship with our crops, both how we have transformed the plant species we use as food, and how our society—our culture—has changed in response to the need to secure food sources. From the origins of agriculture to gluten sensitivities, from our first selection of the largest seeds from wheat’s wild progenitors to the sequencing of the wheat genome and genetic engineering, Amber Waves sheds new light on how we grow the food that sustains so much human life.
Catherine Zabinski is professor of plant and soil ecology in the Department of Land Resources and Environmental Sciences at Montana State University in Bozeman. She received a fellowship from the Arthur P. Sloan Foundation to work on Amber Waves.
"Relationships can be notoriously complicated, and our ancient bond with wheat is no exception. As Zabinski recounts in Amber Waves, it’s been a rocky path over the millennia, replete with heartbreak, endless drama, and even an unlikely love affair. If it hadn’t been for a capricious interloper named goatgrass mixing into wheat’s gene pool half a million years ago, our daily staple of bread—not to mention birthday cakes, mac and cheese, and pepperoni pizza—might never have existed. . . . Amber Waves nimbly segues into a socio-agro primer, providing a crash course in genetics, plant breeding, and agronomy. The author . . . also provides a fascinating retrospective on some of our lesser-known food innovators. . . . Engaging. . . . Zabinksi is a reliably optimistic guide, pointing us toward a hopeful food future. ‘As a species,’ she observes, ‘we have a stunning capacity for creativity and problem solving. Imagine if we focused all that capacity on optimizing agricultural production in the most environmentally sustainable way.’ It’s a towering opportunity for such a tiny, humble seed—but one that seems tantalizingly close to being within our grasp."
— Wall Street Journal

"A pleasant . . . account of the long history of humans and wheat. . . . Zabinski notes how agricultural practices have driven social and political organization, and speculates that wheat cultivation led to militarization, as armies were used to keep laborers in the fields and to protect farmers from outside raiders. In elaborating on the interconnections between wheat production and culture, she shares some worthwhile historical tidbits, such as how the need to grow wheat across North America’s ‘wide temperature and precipitation gradients’ gave rise, in the nineteenth century, to breeding as a modern science, or how Hitler’s invasion of the Soviet Union was motivated by his desire for Ukraine’s fertile soils."
— Publishers Weekly

"Wheat is a staple in the diets of cultures across the globe. But when and how did the first societies decide to consume grass seeds? Plant and soil ecologist Zabinski takes the discussion beyond history and anthropology to talk about the science of agriculture and the development of wheat production throughout the modern world. The more practical aspects of the crop are also discussed, such as why grass seeds are easier to store than other early cultivated grains. While the account focuses on wheat’s history, there is a section that concentrates on the stress of the crop for a growing population. An abundance of endnotes and references indicate an extensively researched text, while the chronological narrative reads like a biography starting with ancient people and cultivation through the modern practices of manipulating food DNA. . . . This work will appeal to lay scientists, anthropologists, and consumers who wish to know more about the science behind this common dietary staple."
— Library Journal

“Deftly surveys both the biological and the social perspective in nine concise chapters, starting in deep time, with a quick summary of the evolution of plants, then moving swiftly through the first agricultural societies, the growth of city-states, the great empires of the classical and medieval world, and on into the modern era. Wheat is a silent but salient character, providing the energy needed to maintain growing concentrations of population, shaping systems of social organization needed to manage production and distribute food, and driving innovations in agriculture, such as crop rotation, irrigation, and the moldboard plow of the Middle Ages. . . . It’s clearly an open-ended story, not just a tale of how humans have used a nutritious plant, writes Zabinski, but ‘how that plant used us to take over the world.’”
— Laurence A. Marschall

"The human relationship with wheat is the subject of Zabinski’s short book Amber Waves, which presents itself as a ‘biography’ of the grain. . . . Zabinski, a plant and soil ecologist at Montana State University, seeks to tell ‘a story of a group of grasses whose existence became complicated by its convergence with our own species and our never-ending need for more food’. The vast consumption of wheat today is linked to the fact that it is the main ingredient in so many convenience foods. If you want to satisfy hunger quickly and cheaply, the odds are that you will turn to a wheat-based food (unless you opt for potatoes, in the form of crisps or chips). You might buy a healthy wrap or an unhealthy burger or a pie or a sandwich or a slice of pizza or a tub of instant ramen or a samosa or a slice of toast or a bowl of bran flakes. Whichever choice you make, you will end up eating the same industrial wheat. No other grain comes in such a vast range of ready-to-eat foods. Yet it must have taken great perseverance and ingenuity for our Neolithic ancestors to add wheat to their diets."
— Bee Wilson

"In this high-fiber read, plant ecologist Zabinski follows the evolution of wheat, from its wild origins to its highly modified existence as a staple of modern agriculture."
— LitHub

"Wheat was among the first grains to be cultivated and it is now one of the most important staple crops in the world. In Amber Waves, Zabinski . . . tells the story of wheat from its origin, domestication, and genetic improvement, and the history of its production, processing, and trade. Moreover, Zabinski proposes that the biography of wheat is not simply the story of a crop—it is a thread in the history of humans seeking food security. . . . This story about the complex relationship between humans and crops should appeal to plant scientists in particular, and indeed the general public."
— Nature Food

"Zabinski has produced a tour de force with Amber Waves. From her work as a soil and plant ecologist at Montana State University she pulls together the fascinating biological and social history of wheat. It is a story of human ingenuity across thousands of years."
— Jenny Willan

"Zabinski explores the history of wheat and society, and argues we must focus on optimizing agriculture in environmentally sustainable ways."
— Climate & Capitalism

"Skillfully done. . . . I urge you to read Amber Waves by Zabinski, which is an excellent example of plants-and-people writing—and is also pretty good SciComm . . . "
— Botany One

"The story of wheat is inextricably linked with that of humans. Zabinski’s Amber Waves tells both. In fact, the author suggests this might be the tale of how wheat used humans to take over the world. . . . Zabinski’s warm, down-to-earth style and whimsical analogies are so engaging that readers might not notice how much archaeology, soil chemistry, and molecular genetics they are absorbing. Biology students who found photosynthesis boring didn’t have Zabinski as their instructor. . . . She tosses delicious tidbits into her literary soup, such as origin stories for Turkey Red and Red Fife, formerly the dominant types of wheat grown in the United States and Canada, respectively. . . . Amber Waves would make a good text for an introductory agriculture course—and for anyone who wants to understand how today’s food is grown. Zabinski does not rail against current agricultural systems; nor does she give checklists of actions for readers to follow to become better food citizens. Instead, she starts at the beginnings of agriculture to explain why contemporary wheat has turned out the way it has, why humans now grow it as they do, and why these methods might not work so well in the future. She suggests that readers listen to the story carried in the whisper of the wheat stalks and think hard about how to make food systems more sustainable and equitable."
— Issues in Science and Technology

“In a friendly and accessible style, Amber Waves rather cleverly integrates material about plant evolution and physiological processes into a narrative of the development of wheat, concentrating heavily on the early stages of the process of plant domestication, with asides into evolution, genetics, plant nutrition, gluten-related health issues, and the role of wheat in history and power politics. A balanced discussion of the Green Revolution and the future possibilities of wheat breeding bring the story up to date for anyone who wishes to learn more about the history of farming and about plants.”
— Noel Kingsbury, author of "Hybrid: The History and Science of Plant Breeding" and "Garden Flora: The Natural and Cultural History of the Plants in Your Garden"

“Zabinski not only offers a biography of the multiple species known as ‘wheat’ but presents their story in the context of the rise of civilization itself.”
— Norman C. Ellstrand, author of "Sex on the Kitchen Table: The Romance of Plants and Your Food" and "Dangerous Liaisons? When Cultivated Plants Mate with Their Wild Relatives"

"This book is recommended to everyone who wants to discover that wheat is much more than just the basis of regular bread."
— Economic Botany

"In Amber Waves, Zabinski explores how wheat has claimed this preeminent place in farmers’ fields and in our diets. A professor of plant and soil ecology, Zabinski’s gift as a science communicator shines throughout the book. Her story goes well beyond photosynthesis, plant physiology, and genetics, as she uses insights from archeology, anthropology, and politics to unravel the long, intertwining history of wheat and the human societies that have gathered, planted, harvested, and eaten wheat seeds for millennia. . . . This book makes a fine contribution to food history. Suitable for a wide audience, it shows the promise of weaving together the natural and social sciences to engage with the full complexity of humanity’s relationship to food."
— Gastronomica

"Zabinski’s book is very readable, reliable, and well-substantiated in scientific and historical terms. The author succeeds in presenting the ecological, political, social, and cultural conditions that have made wheat such an important staple food."
— Frankfurter Allgemeine Zeitung (translated from German)