Who Is the City For?: Architecture, Equity, and the Public Realm in Chicago (Hardcover) 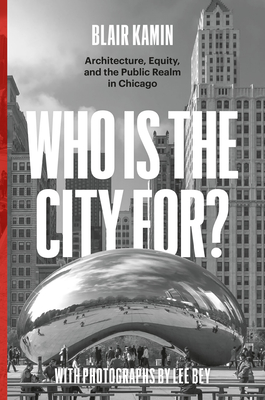 Who Is the City For?: Architecture, Equity, and the Public Realm in Chicago (Hardcover)


On Our Shelves Now at:
A vividly illustrated collaboration between two of Chicago’s most celebrated architecture critics casts a wise and unsparing eye on inequities in the built environment and attempts to rectify them.

From his high-profile battles with Donald Trump to his insightful celebrations of Frank Lloyd Wright and front-page takedowns of Chicago mega-projects like Lincoln Yards, Pulitzer Prize–winning architecture critic Blair Kamin has long informed and delighted readers with his illuminating commentary. Kamin’s newest collection, Who Is the City For?, does more than gather fifty-five of his most notable Chicago Tribune columns from the past decade: it pairs his words with striking new images by photographer and architecture critic Lee Bey, Kamin’s former rival at the Chicago Sun-Times. Together, they paint a revealing portrait of Chicago that reaches beyond its glamorous downtown and dramatic buildings by renowned architects like Jeanne Gang to its culturally diverse neighborhoods, including modest structures associated with storied figures from the city’s Black history, such as Emmett Till.

At the book’s heart is its expansive approach to a central concept in contemporary political and architectural discourse: equity. Kamin argues for a broad understanding of the term, one that prioritizes both the shared spaces of the public realm and the urgent need to rebuild Black and brown neighborhoods devastated by decades of discrimination and disinvestment.  “At best,” he writes in the book’s introduction, “the public realm can serve as an equalizing force, a democratizing force. It can spread life’s pleasures and confer dignity, irrespective of a person’s race, income, creed, or gender. In doing so, the public realm can promote the social contract — the notion that we are more than our individual selves, that our common humanity is made manifest in common ground.” Yet the reality in Chicago, as Who Is the City For? powerfully demonstrates, often falls painfully short of that ideal.
Blair Kamin is the author or editor of several books, including Why Architecture Matters: Lessons from Chicago and Terror and Wonder: Architecture in a Tumultuous Age. The Chicago Tribune’s architecture critic for 28 years, Kamin was awarded the Pulitzer Prize for Criticism in 1999.

Lee Bey is an editorial writer and architecture critic for the Chicago Sun-Times and the author of Southern Exposure: The Overlooked Architecture of Chicago’s South Side. Previously former Chicago mayor Richard M. Daley’s deputy chief of staff for architecture and urban planning, Bey has had photographs published in the New York Times and Architectural Digest.
“It is divinely inspired that the spine of former Chicago Tribune architecture critic Blair Kamin’s new collection of essays is red and bleeds slightly onto the front and back covers. . . The red line of the spine . . . serves as a reminder of the policies, legislation, and rules that have kept Chicago racially and economically separated. In Who Is the City For? Architecture, Equity, and the Public Realm in Chicago, Kamin, with the support of photographs by Chicago Sun-Times architecture critic Lee Bey, probes just who Chicago serves and how the city can be reshaped and reimagined as a space for all its residents.”
— Chicago Magazine

"[Who Is the City For?] offers plentiful, incisive, and urbanistic vignettes of Chicago. . . . It will be treasured by urbanophiles and architecture lovers alike. . . . Excellent photographs support the collection. In Kamin’s masterful hand, architectural criticism is about far more than design. It is a civic project: a public conversation
about politics, the public good, and the promise of urban life."
— Booklist

"A collection of 55 Kamin essays from the past decade, with outstanding photographs by Bey. . . . if you really want to understand what we’re missing in architecture criticism today, read (this) new book."
— J. Michael Welton, Architects+Artisans

“For more than thirty years, Kamin’s clearheaded and forceful writing has set the standard for American architectural criticism. With this wide-ranging new collection, he steps into the intersection where design, urbanism, and social justice meet, proving once again that the best architecture writing is about much more than the way buildings look.”
— Inga Saffron, Pulitzer Prize winner and author of Becoming Philadelphia: How an Old American City Made Itself New Again

“No one can match Blair Kamin’s sustained scrutiny and deep understanding of Chicago architecture over the last three decades and beyond. In this book, he succeeds splendidly in offering a new collection of his uniformly excellent, interesting, and important writings. Who Is the City For? is compelling reading for anyone interested not just in Chicago, but in significant trends—both good and bad—in contemporary architecture and city life more broadly."
— Carl Smith, author of The Plan of Chicago: Daniel Burnham and the Remaking of the American City

“The book features striking black-and-white photographs of structures like ‘Cloud Gate’ in Millennium Park. . . (It) reveals how much influence a good architecture critic can have on a city to shape opinion and sound the alarm when something is going wrong.”
— Mary Wisniewski

"Who Is the City For? collects 55 stories by former Tribune architecture critic Blair Kamin, focusing on the idea of Chicago as a sort of collective trust—or as Kamin explains, 'our common humanity is made manifest in common ground.’ Cleverly, the book pairs its columns with photos from Sun-Times architecture critic Lee Bey."

“It’s a great collection of Blair’s columns and also some wonderful photographs from Lee Bey. . . It’s a beautiful book,”

“This is a wonderful book.”