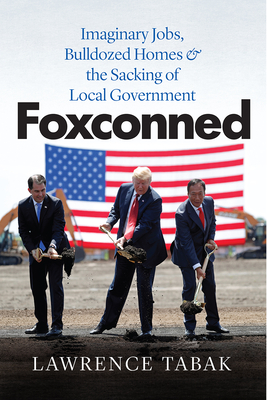 
On Our Shelves Now at:
Powerful and resonant, Foxconned is both the definitive autopsy of the Foxconn fiasco and a dire warning to communities and states nationwide.

When Wisconsin governor Scott Walker stood shoulder to shoulder with President Trump and Speaker of the House Paul Ryan at the White House in July 2017, they painted a glorious picture of his state’s future. Foxconn, the enormous China-based electronics firm, was promising to bring TV manufacturing back to the United States with a $10 billion investment and 13,000 well-paying jobs. They actually were making America great again, they crowed.

Two years later, the project was in shambles. Ten thousand construction workers were supposed to have been building what Trump had promised would be “the eighth wonder of the world.” Instead, land had been seized, homes had been destroyed, and hundreds of millions of municipal dollars had been committed for just a few hundred jobs—nowhere near enough for Foxconn to earn the incentives Walker had shoveled at them. In Foxconned, journalist Lawrence Tabak details the full story of this utter collapse, which was disturbingly inevitable.

As Tabak shows, everything about Foxconn was a disaster. But worse, he reveals how the economic incentive infrastructure across the country is broken, leading to waste, cronyism, and the steady transfer of tax revenue to corporations. Tabak details every kind of financial chicanery, from eminent domain abuse to good old-fashioned looting—all to benefit a coterie of consultants, politicians, and contractors. With compassion and care, he also reports the distressing stories of the many individuals whose lives were upended by Foxconn.
Lawrence Tabak is a journalist whose work has appeared in numerous publications, including the New York Times, American Prospect, Salon, Forbes, and the Atlantic. He is based in Madison, Wisconsin.
"Tabak's new book Foxconned isn't just a detailed account of how Donald Trump, Scott Walker, and legislative Republicans snookered Wisconsin into a taxpayer-financed, now-in-shambles deal with corporate giant Foxconn, but an illuminating expose of all that's wrong with the way governments hand out incentives for private development."
— Capital Times

"Tabak's [earlier] warnings about the project proved proved, with astonishing speed, to be well founded. . . . Broadly, and persuasively, Tabak makes the case that municipalities should not seek to spark economic development through large deals with individual companies, because they turn governments into venture capitalists, except governments don’t have the necessary expertise, tend not to hedge their bets, and gamble with taxpayer money."
— Times Literary Supplement

"The new book Foxconned, by Madison’s own Lawrence Tabak, confirms that the factory was a sordid political charade from its inception. In a fit of negligence and malfeasance, political leaders abused the citizens of Wisconsin on behalf of a foreign corporation. The Foxconn affair was a scandal, and Wisconsinites should treat those responsible as political pariahs."
— Isthmus

"Journalist Tabak offers a stark cautionary tale of the murky practices, questionable economics, and political wheeling and dealing done in the name of economic development and job creation by manufacturing giant Foxconn. . . . Economic concepts are accessible and eye-opening in Tabak’s hands, while the events of small-town board meetings are simultaneously infuriating and page-turning. Tabak’s impressively researched and investigated narrative is as timely as it is gripping."
— Publishers Weekly

"The book does such a good job of weaving together economics, history, and politics. . . It effectively illustrates what can go wrong when government officials try to orchestrate economic development."
— Cato Institute

“A gripping and necessary postmortem on one of the biggest economic development fiascos of our time. Tabak applies a critical lens on the enormous quasi-public industry of business recruitment and how it can be exploitative—shockingly so—especially in job-starved postindustrial regions.”
— Angie Schmitt, author of 'Right of Way: Race, Class, and the Silent Epidemic of Pedestrian Deaths in America'

“Foxconned shines a much-needed light on two unfortunate practices that undermine our nation’s economy yet receive far too little attention. One is the out-of-control competition in which governors and mayors throw piles of money at multibillion-dollar corporations to beg them to locate some jobs in their states and cities. Second, Tabak highlights how self-serving politicians often use tens of millions of taxpayers’ dollars to lure corporations so that they can boast about it to boost their reelection efforts. This is an important, well-researched, and highly readable book.”
— Steven Greenhouse, author of 'Beaten Down, Worked Up: The Past, Present, and Future of American Labor'

“Not only does Tabak do a masterful and nuanced job of uncovering and detailing the behind-the-scenes politics that played out in this ill-fated economic development project, but he also tells the human stories of those Wisconsinites whose lives were most upended as a result.”
— Paul Fanlund, publisher and editor in chief, Capital Times of Madison, Wisconsin

"The reporting that went into this book—into tracing the incredibly complex and deliberately hidden story of the damages wrought by Foxconn—is quite simply, breathtaking. This devilishly convoluted story is then told in clear, straightforward prose that makes this a narrative of our time, and one we should all read."
— Harriet Brown, Wisconsin Writers Award judge