The Age of Consequence: The Ordeals of Public Policy in Canada (McGill-Queen's/Brian Mulroney Institute of Government Studies in Leadership, Public Policy, and Governance) (Hardcover) 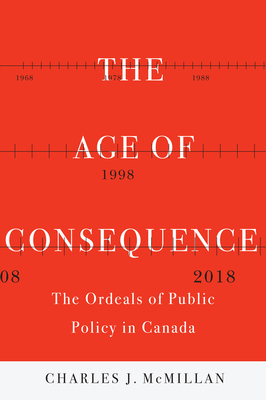 The Age of Consequence: The Ordeals of Public Policy in Canada (McGill-Queen's/Brian Mulroney Institute of Government Studies in Leadership, Public Policy, and Governance) (Hardcover)


Backordered
Since the election of Pierre Trudeau in 1968, Canada has had nine prime ministers, a series of minority governments, as many as sixteen leaders of the opposition, and a turnover of party leaders in provincial governments. This rotation shows the vibrant nature of the Canadian political system, which combines a measure of continuity and stability with change and policy innovation. The Age of Consequence provides an insider’s account of Canada’s political environment over the last fifty years. Focusing on the key personalities, leaders, and political parties of the era, Charles McMillan reveals the reality of policy change in a world in flux, bound by institutional constraints and propelled by personalities that advance or derail policy initiatives. Choosing four policy themes - economic competitiveness, social justice, national reconciliation, and constructive internationalism – the book traces Canada’s policy evolution. As a federation, Canada’s political system is shaped by policy initiatives, leadership campaigns, national elections, the planning and machinery of governance, and the strengths of its various leaders, from John Diefenbaker and Lester B. Pearson to Justin Trudeau. Based on McMillan’s personal experience as senior policy advisor to Prime Minister Brian Mulroney, as well as on interviews, policy papers, and memos, The Age of Consequence sheds light on how public policy is made, the conflicts facing senior members of the government, and the unique burdens placed on prime ministers.
Charles J. McMillan is professor in the Schulich School of Business at York University.
“The Age of Consequence reminds us that countries are framed in their existing forms by policies and philosophies conceived by people who pressed forward against the safe, conventional wisdom of their times and ignored Cicero’s dictum to shy away from such trouble. Much respect and gratitude to them – including, most certainly, Charley.” Policy