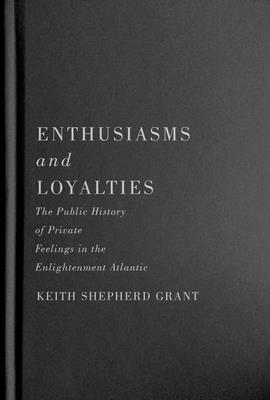 
Special Order—Subject to Availability
The Enlightenment Atlantic was awash in deep feelings. People expressed the ardour of patriots, the homesickness of migrants, the fear of slave revolts, the ecstasy of revivals, the anger of mobs, the grief of wartime, the disorientation of refugees, and the joys of victory. Yet passions and affections were not merely private responses to the events of the period – emotions were also central to the era’s most consequential public events, and even defined them. In Enthusiasms and Loyalties Keith Grant shows that British North Americans participated in a transatlantic swirl of debates over emotions as they attempted to cultivate and make sense of their own feelings in turbulent times. Examining the emotional communities that overlapped in Cornwallis Township, Nova Scotia, between 1770 and 1850, Grant explores the diversity of public feelings, from disaffected loyalists to passionate patriots and ecstatic revivalists. He shows how certain emotions – especially enthusiasm and loyalty – could be embraced or weaponized by political and religious factions, and how their use and meaning changed over time. Feelings could be the glue that made loyalties stick, or a solvent that weakened community bonds. Taking a history of emotions approach, Enthusiasms and Loyalties aims to recover and understand the wide range of political and religious emotions that were possible – feelable – in the Enlightenment Atlantic.
Keith Shepherd Grant is assistant professor of history at Crandall University in New Brunswick and a founding co-editor of Borealia: Early Canadian History.
“Enthusiasms and Loyalties is an important, engaging study, examining the way that Nova Scotians attempted to deal with the impact of the American Revolution and its aftermath. By concentrating on the role that emotion and sentiment played in that process, Grant gives much needed colour and vibrancy to some well-trodden historiographical landscape.” Todd Webb, Laurentian University and author of Transatlantic Methodists: British Wesleyanism and the Formation of an Evangelical Culture in Nineteenth-Century Ontario and Quebec