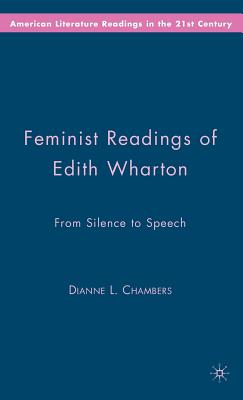 
Special Order—Subject to Availability
This close and innovative study of Edith Wharton's major novels reveals the use of increasingly complex narrative techniques to counter the multiple forces working against women writers at the beginning of the twentieth century.
DIANNE L. CHAMBERS is Professor of English at Elmhurst College, USA.

“This book views Edith Wharton as a specific woman authoring women’s stories at a specific historical moment. Chambers reminds us why we still need feminism: her examination of four of Wharton’s novels illuminates the pervasive and damaging matrix of storytelling, power, and gender.”—Jennifer Haytock, Associate Professor of English at SUNY College at Brockport and author of Edith Wharton and the Conversations of Literary Modernism

“Feminist Readings of Edith Wharton offers a lens through which we can reassess Wharton’s cultural critique, one that helped Wharton and the women authors who followed her gain a fuller, more authoritative participation in literary production.  Through illuminating discussions of four major Wharton texts—The House of Mirth, Summer, The Reef, and The Glimpses of the Moon—Chambers explores the complex and somewhat contradictory relationship between Wharton’s gender training and her evolution as a woman who eventually assumed the prerogatives of authorship…The volume is a valuable addition to our ongoing study of Wharton, narratology, and gender.”—Marilyn Elkins, Professor of English, California State University, Los Angeles