The Field of Cultural Production (Paperback) 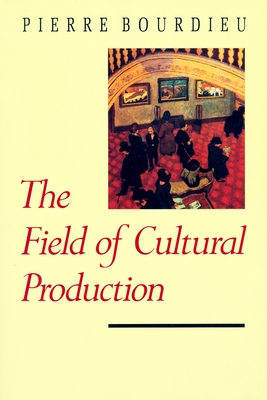 The Field of Cultural Production (Paperback)


Not On Our Shelves—Ships in 1-5 Days
During the last two decades, sociologist Pierre Bourdieu has become a dominant force in cultural activity ranging from taste in music and art to choices in food and lifestyles. The Field of Cultural Production brings together Bourdieu's major essays on art and literature and provides the first introduction to Bourdieu's writings and theory of a cultural field that situates artistic works within the social conditions of their production, circulation, and consumption. Bourdieu develops a highly original approach to the study of literary and artistic works, addressing many of the key issues that have preoccupied literary art and cultural criticism in the last twentieth century: aesthetic value and canonicity, intertextuality, the institutional frameworks of cultural practice, the social role of intellectuals and artists, and structures of literary and artistic authority. Bourdieu elaborates a theory of the cultural field which situates artistic works within the social conditions of their production, circulation, and consumption. He examines the individuals and institutions involved in making cultural products what they are: not only the writers and artists, but also the publishers, critics, dealers, galleries, and academies. He analyzes the structure of the cultural field itself as well as its position within the broader social structures of power. The essays in his volume examine such diverse topics as Flaubert's point of view, Manet's aesthetic revolution, the historical creation of the pure gaze, and the relationship between art and power. The Field of Cultural Porduction will be of interest to students and scholars from a wide range of disciplines: sociology and social theory, literature, art, and cultural studies.
Pierre Bourdieu is professor of Sociology at the College de France. His numerous other works include Homo Academicus and Language and Symbolic Power.