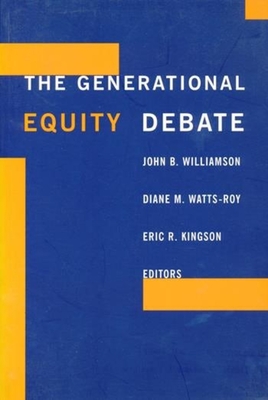 As the ranks of the elderly continue to swell and their social welfare becomes a complex and contentious policy issue, how will the United States balance the conflicting demographic and economic demands of providing for its older citizens--especially in light of the anticipated economic burden of the baby boom generation's impending retirement? These problems place the destiny of Social Security and health care at the epicenter of political discussion and debate, making a balanced perspective on these issues essential--particularly as the lives of millions of future Americans will be affected. The Generational Equity Debate offers social workers, policy analysts, political scientists, and sociologists, as well as general readers concerned about the fate of the elderly, a complete range of viewpoints on this vital subject.

John B. Williamson is professor of sociology at Boston College, and has written extensively in the areas of aging policy and politics. He is the author or coauthor of fifteen books, including Aging and Public Policy and The Politics of Aging.Diane M. Watts-Roy, former director of the Alzheimer's Respite Program in LaGrange, Kentucky, is currently a doctoral student in sociology at Boston College.Eric R. Kingson, a professor of social work at Syracuse University, is the author or coauthor of five books on the economic, social, and political consequences of population aging.