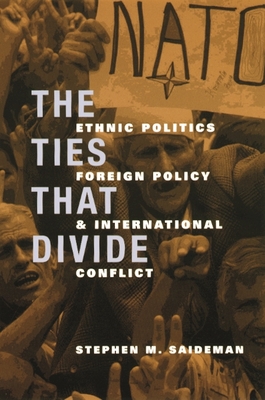 
Not On Our Shelves—Ships in 1-5 Days
Ethnic conflicts have created crises within NATO and between NATO and Russia, produced massive flows of refugees, destabilized neighboring countries, and increased the risk of nuclear war between Pakistan and India. Interventions have cost the United States, the United Nations, and other actors billions of dollars. While scholars and policymakers have devoted considerable attention to this issue, the question of why states take sides in other countries' ethnic conflicts has largely been ignored. Most attention has been directed at debating the value of particular techniques to manage ethnic conflict, including partition, prevention, mediation, intervention, and the like. However, as the Kosovo dispute demonstrated, one of the biggest obstacles to resolving ethnic conflicts is getting the outside actors to cooperate. This book addresses this question. Saideman argues that domestic political competition compels countries to support the side of an ethnic conflict with which constituents share ethnicities. He applies this argument to the Congo Crisis, the Nigerian Civil War, and Yugoslavia's civil wars. He then applies quantitative analyses to ethnic conflicts in the 1990s. Finally, he discusses recent events in Kosovo and whether the findings of these case studies apply more broadly.
Stephen M. Saideman is an assistant professor of political science at Texas Tech University.