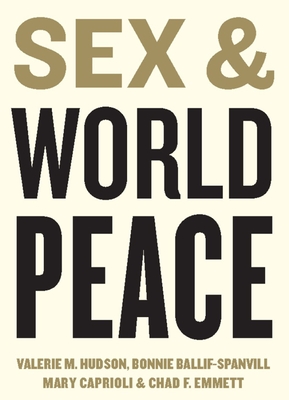 
Not On Our Shelves—Ships in 1-5 Days
Sex and World Peace unsettles a variety of assumptions in political and security discourse, demonstrating that the security of women is a vital factor in the security of the state and its incidence of conflict and war. The authors compare micro-level gender violence and macro-level state peacefulness in global settings, supporting their findings with detailed analyses and color maps. Harnessing an immense amount of data, they call attention to discrepancies between national laws protecting women and the enforcement of those laws, and they note the adverse effects on state security of abnormal sex ratios favoring males, the practice of polygamy, and inequitable realities in family law, among other gendered aggressions. The authors find that the treatment of women informs human interaction at all levels of society. Their research challenges conventional definitions of security and democracy and shows that the treatment of gender, played out on the world stage, informs the true clash of civilizations. In terms of resolving these injustices, the authors examine top-down and bottom-up approaches to healing wounds of violence against women, as well as ways to rectify inequalities in family law and the lack of parity in decision-making councils. Emphasizing the importance of an R2PW, or state responsibility to protect women, they mount a solid campaign against women's systemic insecurity, which effectively unravels the security of all.
Valerie M. Hudson is professor and George H.W. Bush Chair at The Bush School of Government and Public Service at Texas A&M University. Her research concerns foreign policy analysis, security studies, gender and international relations, and methodology, and her articles have appeared in such journals as International Security, Journal of Peace Research, Political Psychology, and Foreign Policy Analysis. She is the author or editor of several books, including, with Andrea Den Boer, Bare Branches: The Security Implications of Asia's Surplus Male Population, which won the American Association of Publishers Award for Best Book in Political Science and the Otis Dudley Duncan Award for Best Book in Social Demography. She was named one of Foreign Policy's Top 100 Global Thinkers of 2009. Bonnie Ballif-Spanvill is professor emeritus of psychology at Brigham Young University and the last director of its Women's Research Institute. She is a fellow in both the Association for Psychological Science and the American Psychological Association. Her research focuses on interpersonal violence and peace. She is a coauthor of Peaceabilities: Compelling Stories and Activities That Develop Abilities of Children to Live Peacefully with Others and coeditor of A Chorus for Peace: A Global Anthology of Poetry by Women. Mary Caprioli is associate professor and director of international studies at the University of Minnesota Duluth. She pioneered a new line of scholarly inquiry between the security of women and the national and international behavior of states and confirmed the link using quantitative methodology. She is an associate editor for Foreign Policy Analysis, an editorial board member for the Peace and Conflict Report, and an advisory board member for the Minorities at Risk Project. She is also a member of the International Group of Experts for the UNSCR 1325 Research Group of the government of Sweden. Chad F. Emmett is an associate professor of geography at Brigham Young University focused on researching the peaceful sharing of space between Israelis and Palestinians, Christians and Muslims, men and women, and other supposedly opposing groups. He is the author of Beyond the Basilica: Christians and Muslims in Nazareth.