Bomb Scare: The History and Future of Nuclear Weapons (Hardcover) 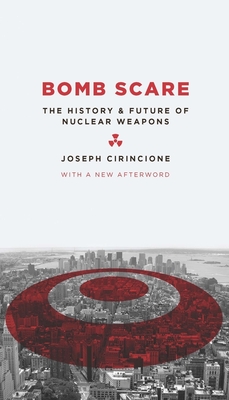 Bomb Scare: The History and Future of Nuclear Weapons (Hardcover)


Special Order—Subject to Availability
Since their inception, nuclear weapons have multiplied at an alarming rate, leaving everyone from policymakers to concerned citizens wondering what it will take to slow, stop, or even reverse their spread. With clarity and expertise, Joseph Cirincione presents an even-handed look at the history of nuclear proliferation and an optimistic vision of its future, providing a comprehensive survey of the wide range of critical perspectives. Cirincione begins with the first atomic discoveries of the 1930s and covers the history of their growth all the way to current crisis with Iran. He unravels the science, strategy, and politics that have fueled the development of nuclear stockpiles and increased the chance of a nuclear terrorist attack. He also explains why many nations choose not to pursue nuclear weapons and pulls from this the outlines of a solution to the world's proliferation problem: a balance of force and diplomacy, enforcement and engagement that yields a steady decrease in these deadly arsenals. Though nuclear weapons have not been used in war since August 1945, there is no guarantee this good fortune will continue. A unique blend of history, theory, and security analysis, Bomb Scare is an engaging text that not only supplies the general reader and student with a clear understanding of this issue but also provides a set of tools policymakers and scholars can use to prevent the cataclysmic consequences of another nuclear attack.
Joseph Cirincione is the president of the Ploughshares Fund, a global security foundation concentrating on nuclear weapons issues, and teaches at the Georgetown University School of Foreign Service. He has served as a senior vice president for national security at the Center for American Progress, the director for nonproliferation at the Carnegie Endowment for International Peace, and on the professional staff of the Armed Services Committee and the Government Operations Committee in the U.S. House of Representatives. He is the coauthor of Deadly Arsenals: Nuclear, Biological and Chemical Threats and Universal Compliance: A Strategy for Nuclear Security. Joseph Cirincione is the Director for Non-Proliferation at the Carnegie Endowment for International Peace and author of Deadly Arsenals: Nuclear, Biological and Chemical Threats, (Second Edition, 2005) and co-author of Universal Compliance: A Strategy for Nuclear Security (March 2005). He teaches at the Georgetown University Graduate School of Foreign Service and is one of America's best known weapons experts, appearing frequently in print and on FOX News, CNN, ABC, NBC, PBS, NPR and occasionally on Comedy Central.