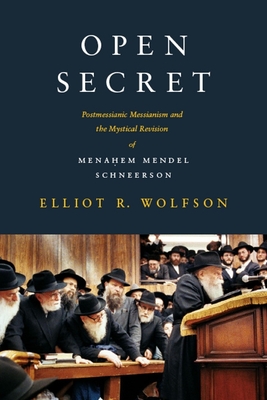 
Special Order—Subject to Availability
Menaḥem Mendel Schneerson (1902-1994) was the seventh and seemingly last Rebbe of the Habad-Lubavitch dynasty. Marked by conflicting tendencies, Schneerson was a radical messianic visionary who promoted a conservative political agenda, a reclusive contemplative who built a hasidic sect into an international movement, and a man dedicated to the exposition of mysteries who nevertheless harbored many secrets. Schneerson astutely masked views that might be deemed heterodox by the canons of orthodoxy while engineering a fundamentalist ideology that could subvert traditional gender hierarchy, the halakhic distinction between permissible and forbidden, and the social-anthropological division between Jew and Gentile. While most literature on the Rebbe focuses on whether or not he identified with the role of Messiah, Elliot R. Wolfson, a leading scholar of Jewish mysticism and the phenomenology of religious experience, concentrates instead on Schneerson's apocalyptic sensibility and his promotion of a mystical consciousness that undermines all discrimination. For Schneerson, the ploy of secrecy is crucial to the dissemination of the messianic secret. To be enlightened messianically is to be delivered from all conceptual limitations, even the very notion of becoming emancipated from limitation. The ultimate liberation, or true and complete redemption, fuses the believer into an infinite essence beyond all duality, even the duality of being emancipated and not emancipated--an emancipation, in other words, that emancipates one from the bind of emancipation. At its deepest level, Schneerson's eschatological orientation discerned that a spiritual master, if he be true, must dispose of the mask of mastery. Situating Habad's thought within the evolution of kabbalistic mysticism, the history of Western philosophy, and Mahayana Buddhism, Wolfson articulates Schneerson's rich theology and profound philosophy, concentrating on the nature of apophatic embodiment, semiotic materiality, hypernomian transvaluation, nondifferentiated alterity, and atemporal temporality.
Elliot R. Wolfson is the Abraham Lieberman Professor of Hebrew and Judaic Studies at New York University. He is a Fellow of the American Academy of Arts and Sciences and a Fellow of the American Academy of Jewish Research. He is the author of numerous essays and books, including Through a Speculum that Shines: Vision and Imagination in Medieval Jewish Mysticism, which was awarded the National Jewish Book Award for Scholarship and the AAR Award for Excellence in Historical Studies; Along the Path: Studies in Kabbalistic Myth, Symbolism, and Hermeneutics; Circle in the Square: Studies in the Use of Gender in Kabbalistic Symbolism; Abraham Abulafia-Kabbalist and Prophet: Hermeneutics, Theosophy, and Theurgy; Language, Eros, Being: Kabbalistic Hermeneutics and Poetic Imagination, which was awarded the National Jewish Book Award in Scholarship; Alef, Mem, Tau: Kabbalistic Musings on Time, Truth, and Death; Venturing Beyond Law and Morality in Kabbalistic Mysticism; and Luminal Darkness: Imaginal Gleanings From Zoharic Literature.