The Practice of the Bible in the Middle Ages: Production, Reception, and Performance in Western Christianity (Paperback) 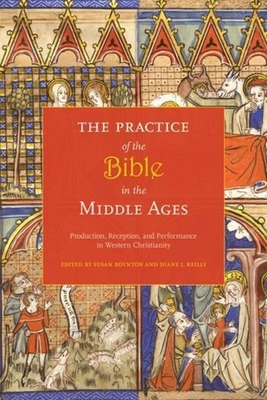 The Practice of the Bible in the Middle Ages: Production, Reception, and Performance in Western Christianity (Paperback)

In this volume, specialists in literature, theology, liturgy, manuscript studies, and history introduce the medieval culture of the Bible in Western Christianity. Emphasizing the living quality of the text and the unique literary traditions that arose from it, they show the many ways in which the Bible was read, performed, recorded, and interpreted by various groups in medieval Europe. An initial orientation introduces the origins, components, and organization of medieval Bibles. Subsequent chapters address the use of the Bible in teaching and preaching, the production and purpose of Biblical manuscripts in religious life, early vernacular versions of the Bible, its influence on medieval historical accounts, the relationship between the Bible and monasticism, and instances of privileged and practical use, as well as the various forms the text took in different parts of Europe. The dedicated merging of disciplines, both within each chapter and overall in the book, enable readers to encounter the Bible in much the same way as it was once experienced: on multiple levels and registers, through different lenses and screens, and always personally and intimately.

Susan Boynton is associate professor of historical musicology at Columbia University and author of Shaping a Monastic Identity: Liturgy and the History at the Imperial Abbey of Farfa, 1000-1125. Diane J. Reilly is associate professor of art history at Indiana University, Bloomington, and author of The Art of Reform in Eleventh-Century Flanders: Gerard of Cambrai, Richard of Saint-Vanne, and the Saint Vaast Bible.