The Body Incantatory: Spells and the Ritual Imagination in Medieval Chinese Buddhism (Paperback) 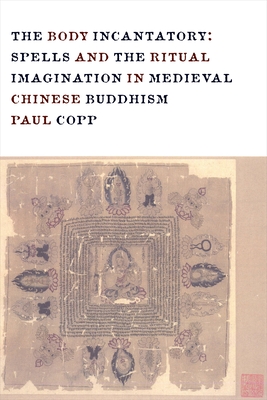 The Body Incantatory: Spells and the Ritual Imagination in Medieval Chinese Buddhism (Paperback)

Whether chanted as devotional prayers, intoned against the dangers of the wilds, or invoked to heal the sick and bring ease to the dead, incantations were pervasive features of Buddhist practice in late medieval China (600-1000 C.E.). Material incantations, in forms such as spell-inscribed amulets and stone pillars, were also central to the spiritual lives of both monks and laypeople. In centering its analysis on the Chinese material culture of these deeply embodied forms of Buddhist ritual, The Body Incantatory reveals histories of practice--and logics of practice--that have until now remained hidden.

Paul Copp examines inscribed stones, urns, and other objects unearthed from anonymous tombs; spells carved into pillars near mountain temples; and manuscripts and prints from both tombs and the Dunhuang cache. Focusing on two major Buddhist spells, or dhāraṇī, and their embodiment of the incantatory logics of adornment and unction, he makes breakthrough claims about the significance of Buddhist incantation practice not only in medieval China but also in Central Asia and India. Copp's work vividly captures the diversity of Buddhist practice among medieval monks, ritual healers, and other individuals lost to history, offering a corrective to accounts that have overemphasized elite, canonical materials.

Paul Copp is associate professor in Chinese religion and thought at the University of Chicago.