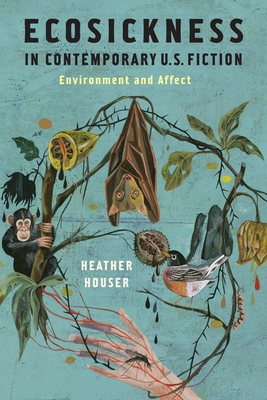 
Not On Our Shelves—Ships in 1-5 Days
The 1970s brought a new understanding of the biological and intellectual impact of environmental crises on human beings. As efforts to prevent ecological and bodily injury aligned, a new literature of sickness emerged. "Ecosickness fiction" imaginatively rethinks the link between these forms of threat and the sick body to bring readers to environmental consciousness. Tracing the development of ecosickness through a compelling archive of contemporary U.S. novels and memoirs, Ecosickness in Contemporary U.S. Fiction establishes that we cannot comprehend environmental and medical dilemmas through data alone and must call on the sometimes surprising emotions that literary metaphors, tropes, and narratives deploy. In chapters on David Foster Wallace, Richard Powers, Leslie Marmon Silko, Marge Piercy, Jan Zita Grover, and David Wojnarowicz, Heather Houser shows how narrative affects such as wonder and disgust organize perception of an endangered world and orient us ethically toward it. The study builds the connective tissue between contemporary literature, ecocriticism, affect studies, and the medical humanities. It also positions ecosickness fiction relative to emergent forms of environmentalism and technoscientific innovations such as regenerative medicine and alternative ecosystems. Houser models an approach to contemporary fiction as a laboratory for affective changes that spark or squelch ethical projects.
Heather Houser is associate professor of English at the University of Texas at Austin.