Perilous Medicine: The Struggle to Protect Health Care from the Violence of War (Hardcover) 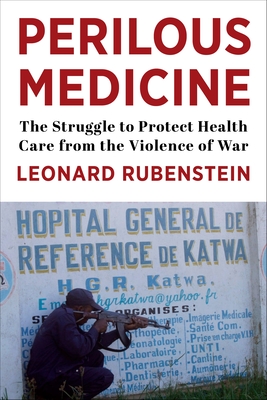 Perilous Medicine: The Struggle to Protect Health Care from the Violence of War (Hardcover)


In Stock—Click for Locations
Pervasive violence against hospitals, patients, doctors, and other health workers has become a horrifically common feature of modern war. These relentless attacks destroy lives and the capacity of health systems to tend to those in need. Inaction to stop this violence undermines long-standing values and laws designed to ensure that sick and wounded people receive care. Leonard Rubenstein--a human rights lawyer who has investigated atrocities against health workers around the world--offers a gripping and powerful account of the dangers health workers face during conflict and the legal, political, and moral struggle to protect them. In a dozen case studies, he shares the stories of people who have been attacked while seeking to serve patients under dire circumstances including health workers hiding from soldiers in the forests of eastern Myanmar as they seek to serve oppressed ethnic communities, surgeons in Syria operating as their hospitals are bombed, and Afghan hospital staff attacked by the Taliban as well as government and foreign forces. Rubenstein reveals how political and military leaders evade their legal obligations to protect health care in war, punish doctors and nurses for adhering to their responsibilities to provide care to all in need, and fail to hold perpetrators to account. Bringing together extensive research, firsthand experience, and compelling personal stories, Perilous Medicine also offers a path forward, detailing the lessons the international community needs to learn to protect people already suffering in war and those on the front lines of health care in conflict-ridden places around the world.
Leonard Rubenstein is professor and director of the Program on Human Rights and Health in Conflict at Johns Hopkins Bloomberg School of Public Health. He was previously president of Physicians for Human Rights and is a recognized global expert on violence against health care.