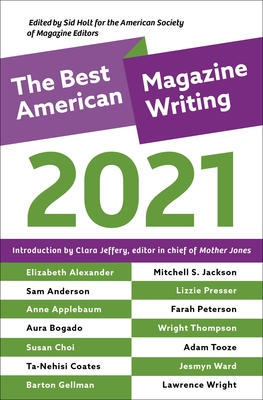 
In Stock—Click for Locations
The Best American Magazine Writing 2021 will feature a selection of articles honored by this year's National Magazine Awards for Print and Digital Media. These awards are sponsored and administered by the American Society of Magazine Editors in association with the Columbia University Graduate School of Journalism. The National Magazine Awards are one of the most prestigious journalism prizes for print and digital media in the United States. More than 300 leading journalists, including the editorial leaders of the most widely read magazines and websites in the country, read more than 1,000 entries and then choose fewer than three dozen feature stories to honor as National Magazine Awards finalists and winners. Originally limited to print magazines, the awards now recognize magazine-quality journalism published in any medium. Each annual anthology includes articles representing a broad range of writing, from hard-hitting investigative reporting and lyrical fiction to eloquent feature writing and incisive cultural criticism. This year's finalists and winners will be announced in June. Recent anthologies of the Best American Magazine Writing have included work from publications such as The Atlantic, Cosmopolitan, Elle, Esquire, GQ, Harper's, Mother Jones, New York, the New York Times Magazine, the New Yorker, Vanity Fair, and Wired, as well as from journals and websites like Buzzfeed, Catapult, the Georgia Review, McSweeney's Quarterly, the Marshall Project, The Nation, the Paris Review, Poetry, ProPublica, and Zoetrope: All-Story.
Sid Holt is chief executive of the American Society of Magazine Editors and a former editor at Rolling Stone and Adweek magazines. Clara Jeffery is editor in chief of Mother Jones.