God Is Dead. God Remains Dead. And We Have Killed Him. (Penguin Great Ideas) (Paperback) 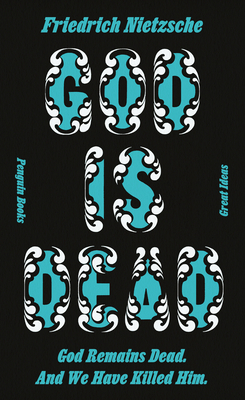 God Is Dead. God Remains Dead. And We Have Killed Him. (Penguin Great Ideas) (Paperback)


In Stock—Click for Locations
Grounded in his famous notion that "God is dead," a selection from Nietzsche's most personal book, The Joyous Science

Nietzsche's devastating demolition of religion would have seismic consequences for future generations. With God dead, he envisages a brilliant future for humanity: one in which individuals would at last be responsible for their destinies.

Throughout history, some books have changed the world. They have transformed the way we see ourselves - and each other. They have inspired debate, dissent, war and revolution. They have enlightened, outraged, provoked and comforted. They have enriched lives--and upended them. Now Penguin brings you a new set of the acclaimed Great Ideas, a curated library of selections from the works of the great thinkers, pioneers, radicals and visionaries whose ideas shook civilization and helped make us who we are.
Friedrich Nietzsche (1844-1900) was born near Leipzig in 1844. When he was only twenty-four he was appointed to the chair of classical philology at Basel University. Works published in the 1880s include The Gay Science, Thus Spoke Zarathustra, Beyond Good and Evil, On the Genealogy of Morals, Twilight of the Idols and The Antichrist. In January 1889, Nietzsche collapsed on a street in Turin and was subsequently institutionalized, spending the rest of his life in a condition of mental and physical paralysis. Works published after his death in 1900 include Will to Power, based on his notebooks, and Ecce Homo, his autobiography.