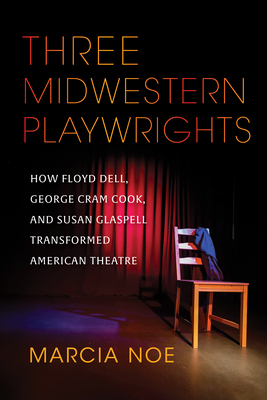 In the early 1900s, three small-town midwestern playwrights helped shepherd American theatre into the modern era. Together, they created the renowned Provincetown Players collective, which not only launched many careers but also had the power to affect US social, cultural, and political beliefs.

The philosophical and political orientations of Floyd Dell, George Cram Cook, and Susan Glaspell generated a theatre practice marked by experimentalism, collaboration, leftist cultural critique, rebellion, liberation, and community engagement. In Three Midwestern Playwrights, Marcia Noe situates the origin of the Provincetown aesthetic in Davenport, Iowa, a Mississippi River town. All three playwrights recognized that radical politics sometimes begat radical chic, and several of their plays satirize the faddish elements of the progressive political, social, and cultural movements they were active in.

Marcia Noe is author of Susan Glaspell: Voice from the Heartland and over 20 other publications on this Pulitzer Prize-winning playwright. Noe edits the academic journal MidAmerica for the Society for the Study of Midwestern Literature and is Professor of English and Director of Women, Gender, and Sexuality Studies at the University of Tennessee at Chattanooga.