Thunderbolt: General Creighton Abrams and the Army of His Times (Paperback) 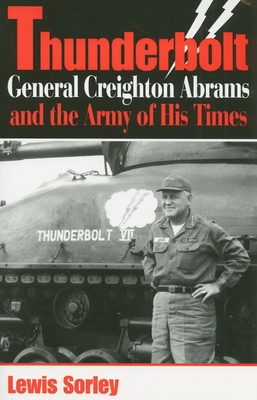 Thunderbolt: General Creighton Abrams and the Army of His Times (Paperback)

General Creighton Abrams has been called the greatest American general since Ulysses S. Grant, yet at the time this book was first published in 1992, he was little known by most Americans. For more than four decades, in three wars and in challenging peacetime assignments, Abrams demonstrated the skill, courage, integrity, and compassion that made him a legend in his profession. Thunderbolt is the definitive biography of the man who commanded U.S. forces in Vietnam during the withdrawal stage and for whom the army's main battle tank is named. With a new introduction by the author, this edition places the complex and sophisticated Abrams and his many achievements in the context of the army he served and ultimately led, and of the national and international events in which he played a vital role. Thunderbolt is a stirring portrait of the quintessential soldier and of the transformation of the U.S. Army from the horse brigades of the 1930s to the high-tech military force of today.

Lewis Sorley, a third-generation graduate of West Point, served in Vietnam, in NATO forces, and as a Pentagon staff officer. He has taught at West Point and the U.S. Army War College, and has written widely on military affairs and national security. He lives in Potomac, Maryland.