The Myth of the Lost Cause and Civil War History (Paperback) 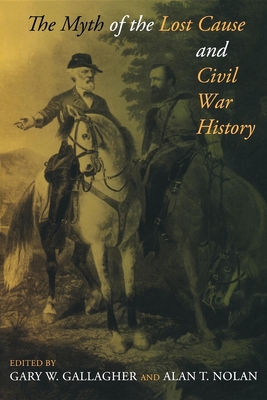 The Myth of the Lost Cause and Civil War History (Paperback)

Was the Confederacy doomed from the start in its struggle against the superior might of the Union? Did its forces fight heroically against all odds for the cause of states' rights? In reality, these suggestions are an elaborate and intentional effort on the part of Southerners to rationalize the secession and the war itself. Unfortunately, skillful propagandists have been so successful in promoting this romanticized view that the Lost Cause has assumed a life of its own. Misrepresenting the war's true origins and its actual course, the myth of the Lost Cause distorts our national memory. In The Myth of the Lost Cause and Civil War History, nine historians describe and analyze the Lost Cause, identifying ways in which it falsifies history--creating a volume that makes a significant contribution to Civil War historiography.

Gary W. Gallagher is John L. Nau III Professor of History at the University of Virginia. He has written or edited a number of books in the field of Civil War-era history, including, most recently, The Confederate War, Lee and His Generals in War and Memory; and Causes Won, Lost, and Forgotten: How Hollywood and Popular Art Shape What We Know about the Civil War.Alan T. Nolan (1923-2008) is author of Lee Considered: Robert E. Lee and Civil War History and The Iron Brigade: A Military History (IUP, 1994), and editor (with Sharon Eggleston Vipond) of Giants in Their Tall Black Hats: Essays on the Iron Brigade (IUP, 1998).