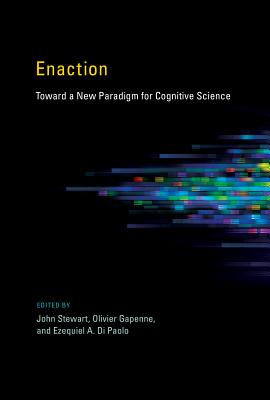 A comprehensive presentation of an approach that proposes a new account of cognition at levels from the cellular to the social.

This book presents the framework for a new, comprehensive approach to cognitive science. The proposed paradigm, enaction, offers an alternative to cognitive science's classical, first-generation Computational Theory of Mind (CTM). Enaction, first articulated by Varela, Thompson, and Rosch in The Embodied Mind (MIT Press, 1991), breaks from CTM's formalisms of information processing and symbolic representations to view cognition as grounded in the sensorimotor dynamics of the interactions between a living organism and its environment. A living organism enacts the world it lives in; its embodied action in the world constitutes its perception and thereby grounds its cognition. Enaction offers a range of perspectives on this exciting new approach to embodied cognitive science.

Some chapters offer manifestos for the enaction paradigm; others address specific areas of research, including artificial intelligence, developmental psychology, neuroscience, language, phenomenology, and culture and cognition. Three themes emerge as testimony to the originality and specificity of enaction as a paradigm: the relation between first-person lived experience and third-person natural science; the ambition to provide an encompassing framework applicable at levels from the cell to society; and the difficulties of reflexivity. Taken together, the chapters offer nothing less than the framework for a far-reaching renewal of cognitive science.

John Stewart is a Scientific Consultant at the University of Technology of Compiegne, France.