OD: Naloxone and the Politics of Overdose (Inside Technology) (Hardcover) 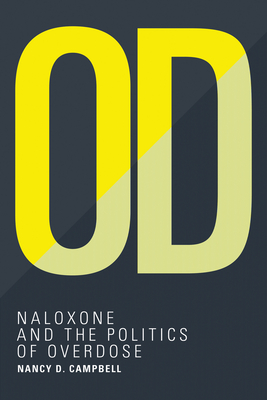 OD: Naloxone and the Politics of Overdose (Inside Technology) (Hardcover)


Special Order—Subject to Availability
The history of an unnatural disaster—drug overdose—and the emergence of naloxone as a social and technological solution.

For years, drug overdose was unmentionable in polite society. OD was understood to be something that took place in dark alleys—an ugly death awaiting social deviants—neither scientifically nor clinically interesting. But over the last several years, overdose prevention has become the unlikely object of a social movement, powered by the miracle drug naloxone. In OD, Nancy Campbell charts the emergence of naloxone as a technological fix for overdose and describes the remaking of overdose into an experience recognized as common, predictable, patterned—and, above all, preventable. Naloxone, which made resuscitation, rescue, and “reversal” after an overdose possible, became a tool for shifting law, policy, clinical medicine, and science toward harm reduction. Liberated from emergency room protocols and distributed in take-home kits to non-medical professionals, it also became a tool of empowerment.

After recounting the prehistory of naloxone—the early treatment of OD as a problem of poisoning, the development of nalorphine (naloxone's predecessor), the idea of “reanimatology”—Campbell describes how naloxone emerged as a tool of harm reduction. She reports on naloxone use in far-flung locations that include post-Thatcherite Britain, rural New Mexico, and cities and towns in Massachusetts. Drawing on interviews with approximately sixty advocates, drug users, former users, friends, families, witnesses, clinicians, and scientists—whom she calls the “protagonists” of her story—Campbell tells a story of saving lives amid the complex, difficult conditions of an unfolding unnatural disaster.

Nancy D. Campbell is Professor and Head of the Department of Science and Technology Studies at Rensselaer Polytechnic Institute. She is the author of Using Women: Gender, Drug Policy, and Social Justice; Discovering Addiction: The Science and Politics of Substance Abuse Research; and coauthor of The Narcotic Farm: The Rise and Fall of America's First Prison for Drug Addicts and Gendering Addiction: The Politics of Drug Treatment in a Neurochemical World.

"Campbell's deeply researched book is driven by her desire to understand why it took so long for naloxone, and overdose prevention, to hit the mainstream. She discovered a group of varied protagonists — drug users, advocates, scientists and others — whose stories illustrate how naloxone, scientific progress and advocacy slowly shifted social attitudes. Her book offers a riveting and complex look into the history of the phenomenon — and a sense of what a future without ODs could look like."

"This work represents an important contribution to the discourse on the opioid epidemic.”
—CHOICE

“This comprehensive history of harm reduction advocacy is quite timely and a major milestone given the opioid epidemic that surrounds us, but it will also be of general interest for researchers who study how social movements can motivate changes in scientific research, social practices, and public policy.”
—David Hess, Professor, Vanderbilt University

“A fascinating perspective on a hidden—and often horrifying—history. Campbell shows just how much we devalue the lives of people with addiction and how far we have to go in order to have humane and effective drug policy.”
—Maia Szalavitz, journalist and author of NYT bestseller Unbroken Brain

“Nancy Campbell has managed to show that, of all the reflecting experts have done on drugs, addiction, and overdose, they've missed something rather important: the nature of overdose itself. Campbell's investigation into the history and politics of drug overdose and the development of the overdose-reversal drug, naloxone, makes a powerful case for a thoroughgoing philosophy of harm reduction.”
—Travis Rieder, Research Scholar, Johns Hopkins Berman Institute of Bioethics; and author of In Pain: A Bioethicist's Personal Struggle with Opioids

“Nancy Campbell offers a moving excavation of the history and social, cultural, and political life of naloxone, a medication that reverses the effects of opioid overdose. A must-read for those of us working on drug policy, OD traces how naloxone moved from a pharmacological tool based in emergency departments to a community intervention that helped sustain a social movement for the humane treatment of people who use drugs. Drawing on research from the US and the UK, OD is instructive for all those of us who care about people who use drugs, and is a valuable introduction for anyone to a complex set of issues affecting the whole of US society.”
—Maria McFarland Sánchez-Moreno, Executive Director, Drug Policy Alliance, and author of There Are No Dead Here: A Story of Murder and Denial in Colombia