How Not to Study a Disease: The Story of Alzheimer's (Hardcover) 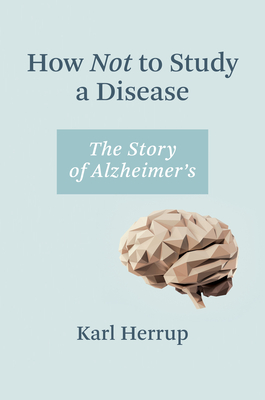 How Not to Study a Disease: The Story of Alzheimer's (Hardcover)


Not On Our Shelves—Ships in 1-5 Days
An authority on Alzheimer's disease offers a history of past failures and a roadmap that points us in a new direction in our journey to a cure.

For decades, some of our best and brightest medical scientists have dedicated themselves to finding a cure for Alzheimer's disease. What happened? Where is the cure? The biggest breakthroughs occurred twenty-five years ago, with little progress since. In How Not to Study a Disease, neurobiologist Karl Herrup explains why the Alzheimer's discoveries of the 1990s didn't bear fruit and maps a direction for future research. Herrup describes the research, explains what's taking so long, and offers an approach for resetting future research.

Herrup offers a unique insider's perspective, describing the red flags that science ignored in the rush to find a cure. He is unsparing in calling out the stubbornness, greed, and bad advice that has hamstrung the field, but his final message is a largely optimistic one. Herrup presents a new and sweeping vision of the field that includes a redefinition of the disease and a fresh conceptualization of aging and dementia that asks us to imagine the brain as a series of interconnected "neighborhoods." He calls for changes in virtually every aspect of the Alzheimer's disease research effort, from the drug development process, to the mechanisms of support for basic research, to the often-overlooked role of the scientific media, and more. With How Not to Study a Disease, Herrup provides a roadmap that points us in a new direction in our journey to a cure for Alzheimer's.
Karl Herrup is Professor of Neurobiology and an Investigator in the Alzheimer's Disease Research Center at the University of Pittsburgh School of Medicine. He is also Adjunct Professor of Life Science at the Hong Kong University of Science and Technology, where he was formerly Head of Life Sciences.