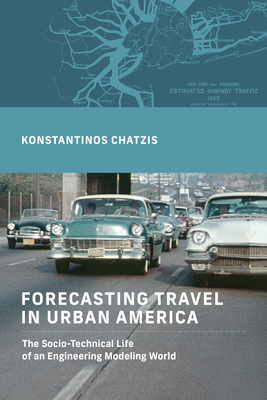 
Coming Soon—Pre-Order Now
A history of urban travel demand modeling (UTDM) and its enormous influence on American life from the 1920s to the present.

For better and worse, the automobile has been an integral part of the American way of life for decades. Its ascendance would have been far less spectacular, however, had engineers and planners not devised urban travel demand modeling (UTDM). This book tells the story of this irreplaceable engineering tool that has helped cities to accommodate continuous rise in traffic from the 1950s on. Beginning with UTDM’s origins as a method to help plan new infrastructure, Konstantinos Chatzis follows its trajectory through new generations of models that helped make optimal use of existing capacity and examines related policy instruments, including the recent use of intelligent transportation systems.

Chatzis investigates these models as evolving entities involving humans and nonhumans that were shaped through a specific production process. In surveying the various generations of UTDM, he delves into various means of production (from tabulating machines to software packages) and travel survey methods (from personal interviews to GPS tracking devices and smartphones) used to obtain critical information. He also looks at the individuals who have collectively built a distinct UTDM social world by displaying specialized knowledge, developing specific skills, and performing various tasks and functions, and by communicating, interacting, and even competing with one another.

Original and refreshingly accessible, Forecasting Travel in Urban America offers the first detailed history behind the thinkers and processes that impact the lives of millions of city dwellers every day.
Konstantinos Chatzis is a full-time researcher at the Université Gustave Eiffel.