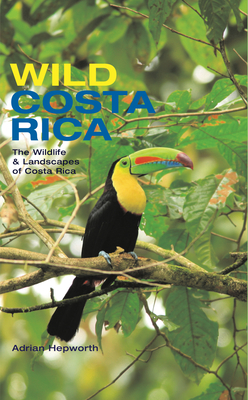 
Not On Our Shelves—Ships in 1-5 Days
An exploration of the most biologically diverse country on the planet, with more than 200 stunning color photographs.

The small Central American country of Costa Rica—less than one-eighth the size of California—boasts the highest density of plant and animal species in the world. Its wild and rugged landscapes include dense rainforests where jaguars roam, a volcano that spews rivers of molten lava, and beaches as unspoiled as they were when Christopher Columbus first anchored his ships off the Caribbean coast in 1502. Costa Rica's rich biodiversity is the result of a hugely varied topography that creates a wide range of natural habitats, and of the presence of animals and plants native to both North and South America. In Wild Costa Rica, photographer Adrian Hepworth explores the natural riches of Costa Rica, providing engaging reports from the field and more than 200 stunning color photographs. We learn about Costa Rica's rainforest, cloudforest, and paramo (high, treeless plain); the abundance of plants, mammals, birds, reptiles, amphibians, and insects these habitats support; and the country's network of protected areas—a system of parks, reserves, and refuges that makes up over twenty percent of Costa Rica's land. These areas—including such flagship wildlife-watching locations as Tortuguero and Corcovado—attract more than a million visitors every year. The money generated by responsible eco-tourism is central to the survival of Costa Rica's wild places. Hepworth's photographs show us breathtaking vistas and introduce us to distinctive native wildlife, including the scarlet macaw, the resplendent quetzal, the three-toed sloth, and spider and howler monkeys. Wild Costa Rica gives us a fascinating picture of the most biologically diverse country in the world.

Adrian Hepworth is a wildlife photographer based in San José, Costa Rica. In 2002, he was a winner in the prestigious BBC Wildlife Photographer of the Year Competition.